Following my blank I opted two days later for a session on the Sunday from 8-30 to 12-30 on the shallows, peg 3 to be precise. The peg was one that looked difficult to access at the start of the season still had all the potential hallmarks of a disaster waiting to happen with the reeds to the left and right but centrally it had cleared a bit. I began with my usual rig for the shallow end and cupped in the habitual 3 balls with 2mm pellet, wheat and a few pieces of corn. Third put in I had a rudd then it went quiet before the float rose like a polaris and a strike saw the elastic come out for a bream of 2-3 to be guided through the vegetation to the net.

More rudd and roach followed before another quiet spell was broken by a skimmer of 1-12. This is a feature of fishing at Bowood – if the roach/rudd stop feeding you know a larger fish has moved in, the question is what? It could be a bream, tench, pike or even one of the elusive carp at this time of year. Anyway, the action continued with the roach and rudd until I packed up, I had a session on the wheat that brought bites faster than the corn but spent a fair bit of time trying a Chinese paste mix that unfortunately the rudd took a liking for! I ended the session with 25 rudd and 12 roach for an 8-2 total.

Two days later with the weather more overcast and a bit cooler I took the long walk up to the end peg on the left bank only to find peg 15 totally disappeared within a dense bank of reeds that stretched out into the water. So peg 16 it was, the only other peg in the smaller of the two arms of the lake, nestled behind the island.

Plumbing up I found I had about 3 feet of water and fishing the same shallow end rig as previously I started with the usual 3 balls,etc.. Second put in I had a roach on the corn, then another then nothing. Five minutes passed and the bulk that I had set 6 inches from the hook and 2 inches off the deck created another polaris effect and a strike saw the elastic come out and a fish kite off to my right. A bream of exactly 3lb was soon in the net, followed 10 minutes later by one of 1-15. The roach then took over interspersed with rudd for the next hour before a quiet period and a row of small bubbles indicated the potential arrival of a tench. A smaller lift of the float resulted in a  fish being connected with that ran off to the right before being turned and after a scrappy fight one of the smallest Bowood tench at 2lb came to the net. Ten minutes later the same happened but this time it was a much larger tench that plodded around at first before heading off to the right again  and eventually the hook pulled! Up to this point the weather had been totally different and was almost cool for a change, by the time I packed up after 3.5 hours I had amassed 50 roach and 21 rudd for an overall total of 16-11. 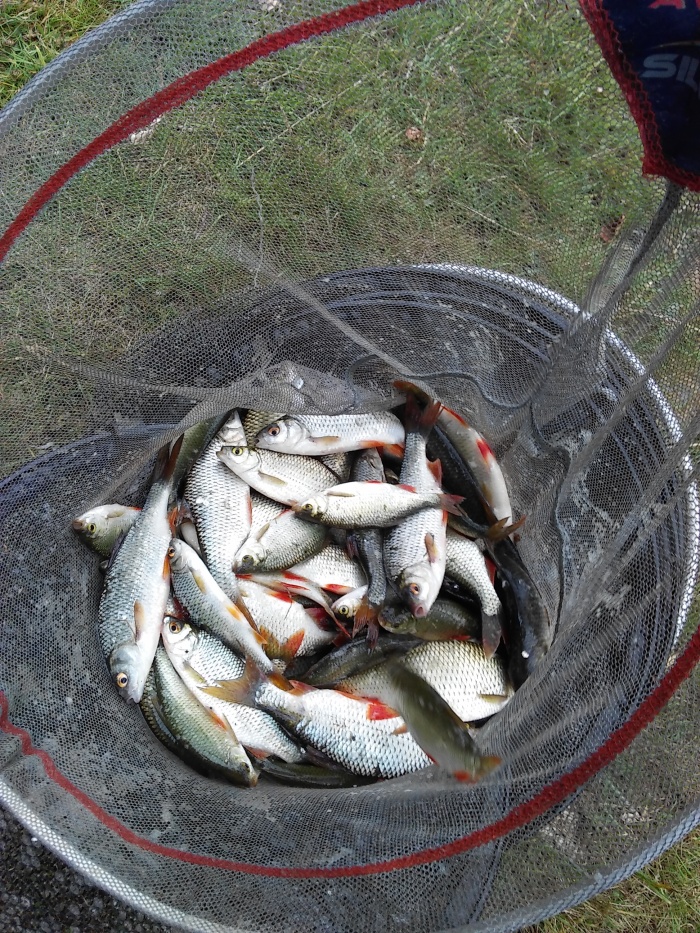 I missed the next three days as the weather got hot again and I  suffer in the heat which is why I like winter!Saturday say me back on peg 3 for a short morning session from 8 to 11, this was no different in approach and one skimmer of 1-8 plus 8 roach and 8 rudd for a 3-8 total was the result.

Next day I changed tack and went for an evening session from 6-8:30, this time on peg 8. I was hoping that the larger bream and tench had moved into the slightly deeper and cooler water – wrong,  10 roach and 7 rudd for 2-8 proved me wrong for that session anyway!

Two days later I trundled up to 19, the last peg before the island.

I had decided to fish the pole although the regulars who fish the peg fish feeder. Plumbing up I found I had just over 6 feet at 10m and I had opted to change from my norm by using a heavier home made pencil float with a bulk of 5 x no4 10 inches from the size 14 hook with a smaller bulk of 4x no 8 just 4 inches from the hook. The smaller bulk was set to be just off the deck. I started with 4 balls this time with the usual wheat, corn and 2mm pellet. Corn on the hook saw instant response from fry attacking the float and the corn! Third put in saw a roach come to the net then a quiet period was broken by a run of bream over the next hour – 2-3, 2-4, 2-6, 1-2 then they were gone and as the sun got hotter and hotter I ended up packing up early with 7 rudd, 6 roach and 2 skimmers giving a 9-4 total. I managed to stagger back the half mile to the car feeling absolutely rotten. The thermometer in the garden shed was showing 102F when I got back! Roll on winter!