End of July saw the penultimate round of the North Wessex Summer League at the Folly in Oxford. I went into the match tied on points as top individual with Pewsey colleague Chis “My Little Pony” Rushton but behind in weight. As it turned out I drew scales for the second match running and ended up on D1 with Chris also in D section on D5.

My peg was on the tow path at the rear of the care home  with the rest of the section around the corner mainly out of sight except for the corner peg  drawn by Craig Curtis. Plumbing up was eventful as apart from about 12foot of water at 11 metres my pole was cut in two half way along the number 4 section by a blind goose who managed to smash straight through it while his other 10 friends managed to fly over it with ease. I managed to ease the top section of pole back towards me and with the aid of organiser Darren Edgell on the end peg of C section finally retrieved it after about 5 minutes! Fortunately I was able to telescope the section as the goose had managed to make a clean break.

The match started and in between the walkers, boaters, canoeists…I managed to put together 27 roach, 7 perch, 5 bleak, 3 skimmers, 3 gudgeon, 2 chublets and a dace for 5-14. I couldn’t buy a bite on my chopped worm line and took all the fish over the 11m groundbait line together with about 5 reggies. I packed away sharpish and went to do my weighing duties knowing that Craig had caught well on both feeder and pole on the corner. First to weigh on the downstream end peg was Paul Rice with a section and match  winning 12-9 with a near 5lb bream plus perch.Craig ended up second in section and match with 12-2, my weight earned me 5 points, one few that Chris who had 2-11. At the end Chris told me he was away for the final match any way but it leaves me two points adrift in third going into the final match at Patneys.

August was disrupted in a sense as my younger son, Gareth was coming home for two weeks before returning to China where he is teaching English. He has been having an interesting time out there fishing wise including hooking a 20kg catfish from a wall 20foot off the water! More usually he has been getting tilipia and snakeheads on worm in one of the many cut offs from the Pearl River. Plus cracking bites off shrimps in a pond near his apartment. 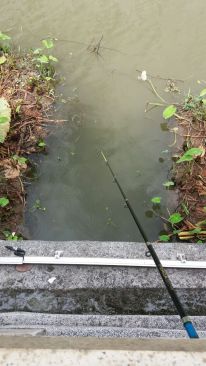 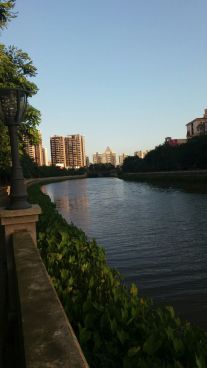 The plan was to sort out the bits and pieces he needed to do then do some fishing !

First visit was an exploratory trip to Patneys, so that I could a) find it and b) have some idea of what it was like, as although it was quite close it was relatively new. Anyway we found it after asking some locals and proceeded to fish differently, I opted for corn at top two and Gareth fished maggot at top two plus 11m line with groundbait. Gareth had 250 fish in the 4 hours we were there, a mixture of small fingerling carp, roach perch and skimmers, while I had all carp except for 2 roach, 150 fish but mine were of a slightly better stamp with the best fish going 2lb+. So it looked like the match would be a fish race unless you could get the bigger carp coming consistently.

The next opportunity we had we went off to Witherington Farm in Salisbury and fished the inner snake as there was a match on the outer and busy elsewhere. A pleasant day with carp coming long and in the margins with us both having in excess of 56lb. Two days later I took Gareth to Viaduct as he had never been, we settled on Cary, Gareth on 75 and we on 76. 75 has a tree going out into the water and 76 has the aerator rope. Incidentally, the aerator was going all day. Gareth set up fishing close to the tree with corn, then paste and proceeded to lose the first 8 carp he hooked while catching skimmers and tench in between times, I started on the pellet waggler and had one fish of 7-8lb before fishing the pole at 11m and finally at 5m on meet. I had 8 carp  for approximately 80lb but lost 15! As Gareth lost yet another carp I gave him my top kit to use while I packed up my kit- fortunately this time he managed to land it! 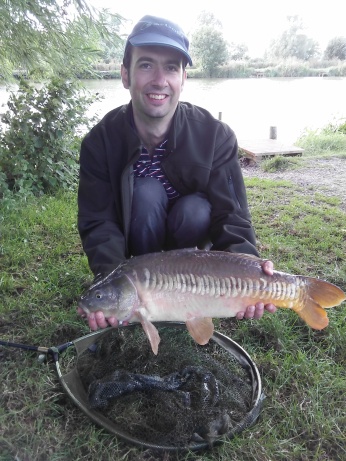 Due to family visits we only had time for one more trip- this was to Larford where we set up on Specci pegs 28 (Gareth) and 29. I set up Gareth with a method feeder initially and he was soon catching skimmers and carp before trying the pole. I had a go on the pellet waggler but had just the one fish about 8lb and then swapped back and fore between the pole and pellet waggler (without much success). With a couple of hours before we had to go I primed the margins with groundbait and micros on both sides as did Gareth and soon the fish came in but were only moving through and not settling. I lost 4 as did Gareth then a group of larger fish moved in on my right and began to feed. I called Gareth and said for him to fish my swim with his pole while I packed my kit up. The result… 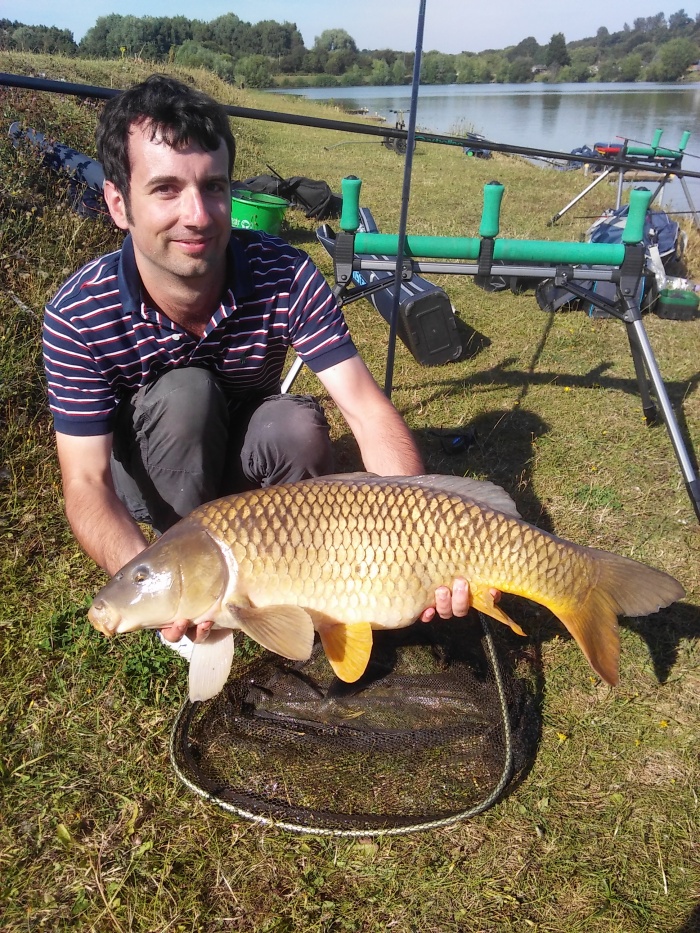 I think he smiled all the way home! We had one very short session on the river just with a whip where he caught roach, dace, perch and chublets before all too soon he was back off to China.

No time to rest though as on the Sunday I had a Feeder Masters qualifier at Keynsham on the Bristol Avon. To cut a very long story short the post code on the directions were wrong and a group of us (7!!!) were lost before we finally managed to get to the parking area. We were then faced with a walk across two football pitches and the same again through long uncut meadow. The premise of the qualifier is that if you win your section you go through to the final. I arrived at my peg C10 with about twenty minutes to spare and absolutely shattered from the walk, plus the realisation that Will Raison was in my section!

My peg was dodgy to say the least with a four foot drop down to a slope that led to an 8 foot drop to the water. I decided discretion was the best way forward and opted to set up right on top of the bank and managed to gingerly get down to position my keepnet so that there were at least 4 rings in the water and the opening facing me so I could put fish in the landing net and slide them into the keepnet that way. God only knows what to do if I needed to net a fish! We had been warned that the tide was due so there would be a 1m rise! Wrong, it was a 1m fall resulting in only the last ring of the net being in the water by the end of the match. 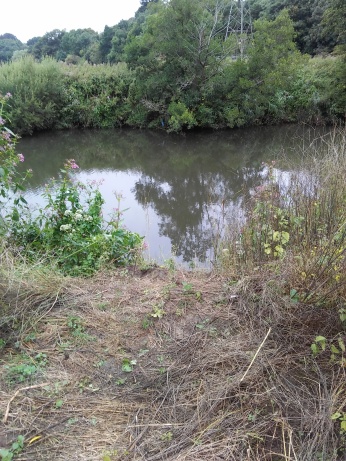 The match itself was underway before I was ready but I began by using a 30g feeder with a 60cm tail paternoster style to an 18 with double maggot.Noire  plus chopped worm and caster went into the feeder. The flow was towards the far bank and there was a nice crease at the edge of the two far bank trees, so I cast just over the crease and didn’t have to wait long before I was swinging in my first roach of the day. In fact the day went quite well with me casting every 3 minutes if I had not had a bite and I was getting plenty of interest from small roach, but hitting them was proving difficult. The bank runners were saying that everyone was the same with nobody claiming more than a few pounds. I managed to hook one better roach that I had to precariously make my way down to net but with an hour to go I swapped the feeder for a black cap one and had 10 casts with just maggots, a couple of roach came to this so I went back on the groundbait feeder and with 15minutes left I hooked a good fish that tried to get under my bank so after a few worrying minutes I just managed to slip the net under a good chub. (Thank god for 4m handles!). A couple of small roach ended the match and packing up I saw that I may be able to cut my journey back in half by going straight across the field I was in and over a style then across the driving range- still a good trek but better than the other way.

The scales arrived and I weighed in 6-11, which they all seemed to think woulsd win the section as no-one was claiming more than 5lb. (I thought this was too good to be true as match anglers always claim less than they have!) I trudged back to the car along with the chap below me and waited for the return of the others. I was right in my assessment as a certain Mr Raison had 6-15 and another angler had 7-10, I was third. I drove home happy in the knowledge that I had done reasonably well from the peg.

Two days later I ventured to Bowood and parked my self on peg 7 with a nice colour in the water, 10 minutes later I was shifting my stuff to Peg 8 as I could not find a clear spot to fish! I had a clear area at 10m in peg 8 and started in my usual manner but only 3 balls of groundbait this time with some micros, wheat and corn. There was obviously a pike around as the water would intermittently erupt with small fish scattering followed by a swathe of bubbles as the pike cleared its gills. For once it did not chase any fish I hooked but I did lose one foul hooked in the tail and another snatched at my corn before throwing the hook. I ended up with 100 roach/rudd and 2 small skimmers plus a pike of 5-3 taken on the jelly lure during one of its attempts of scattering a shoal! A total of 11- 04. Not a typical Bowood weight but it kept me busy!

Next stop Patneys and the final round of the Summer League!