With the match looming the following Sunday I made my way to Bowood and managed to get on Peg 12, half hour before the same angler arrived to find me there (me looking smug!) 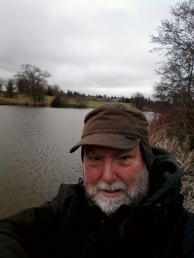 , we exchanged pleasantries and he trudged off up to the top field and the bay. The water was not too coloured but not crystal clear either so I was hopeful of some action. Pike rod out with a joey and three large cups of loose with micros and casters mixed in deposited at 10m in the 8 foot of water I awaited a response. After an hour the pellet waggler I use as a pike float bobbed then went walk about, a strike resulted in a jack of 3-12. No sign on the pole. Another hour past and the same scenario with the pike rod resulted in a jack of 4-4. Still nothing on the pole. A further hour and the float lifted on the pole and resulted in a small roach- at least I had caught something on the pole I thought. A further half hour past when the float buried and the resulting strike was met with a very solid resistance, carefully steering the fish bankwards on a 4-6 hollow and 0.08 Shogun to a 20 I finally managed to get the net under a tench of 4-8. RESULT!

Nothing further happened but I added another pot of loose and waited. About 1:30pm the other angler came past saying he had had a small jack I told him I what I had had and after a brief chat he trudged off back to the car in the far distance. As I watched him trudge up the hill, my float went again and a solid resistance heralded the arrival of another tinca, this time 3-11. Another pot of loose was deposited and 25minutes later, after a spirited fight a tench of 5-9 lay in the net a personal best for Bowood. My last pot of groundbait and a further wait of 40 minutes and the action for the day was concluded with a further tinca of 4-12.  Not a bad outing for a cold February day!

The depth was again about 6 feet and I primed two swims, a worm and caster one at 10 o’clock and a micro one at 2 o’clock. Despite the cold day and distractions the fishing was once again good with many more skimmers than roach, more than 50 to be precise, a perch of 1-2 and a bream of 3lb. The bream fell to the cheese again fished over the micro line. With over 30lb caught I packed up and hoped that Sunday would be similar for the match.

So to the match, there was only one peg I really didn’t fancy- peg 12 which was between the Toilet block and a little jetty, with one peg left in the hat for me – you guessed it- peg 12. I felt I was not going to be able to frame from the peg partly because the trawler that is Brian Shutler had drawn peg 10 – the peg I was fishing when he came to see me, Marc Kay was in between him and me and Chris Rushton was on peg 5, two good anglers in good areas. Plumbing up I found there was a slope from the jetty back towards me and I set up my worm line at the base of the slope at about 9m and my micros to my left about 2m further away. The match started and both I and Cliff Reynolds were soon into fish. The first hour passed quickly with a lot of banter, most aimed at Gary Williams on peg 2 (the bench peg) as he kept hooking large fish both on the pole and the whip and losing them with resultant trashed rigs. He was sure they were carp but I suspected some of them may have been the large perch. After an hour and a half I hooked a large fish that tore off and Gary said “I ‘ve sent  them over to you!”. His face was a picture when the fish was a perch of 2-14.

The worm line was dying and I had been catching roach with only one hybrid, I needed skimmers if I was going to compete. The third and fourth hour was a disaster with hardly anything being put in the net while Marc was steadily catching fish every put in as was Brian. Chris Rushton had had a torrid start losing several rigs on a snag which eventually turned out to be a large branch that had escaped from the tree felling. But he had recovered and was putting together a good run of fish including a foulhooked bream of 3lb. A short burst of 6 skimmers in the last half hour end my match.

That saw the end of February, March is looking busy with another match on at Blacklands, plus a couple of MFS matches.