With a silvers match at Boddington Reservoir in late April rapidly approaching I decided to have a day out and do a bit of practice for the match while pursuing the Chinese style of fishing at the same time! The previous occasions I have fished Boddington it has been gale force winds and usually rain at some point; what met me was  a still reservoir and hazy conditions. There were only two other cars in the car park when I arrived shortly before 9am and having made several trips up the ramp with my kit I settled on peg 36 – a shortish walk and no trees behind me.

The plan was to start off on the Chinese style “banana” and then try the waggler over the same area to compare the difference before finally having a couple of hours on a more traditional whip but with a Chinese float. I had received three sets of floats from China but had brought just one set to try today, I had also bought a Chinese rig system which was very similar to the old Daiwa plastic hook length retaining spools but were slightly wider and made from foam. The line was held in place by trapping it underneath the spool when put into the purpose made spindle in the box. 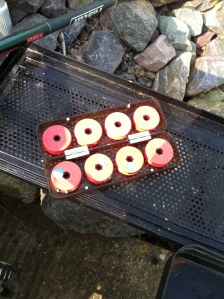 The float took a SSG, a no4, no 8 and 3 x no 10 stotz and was fastened on the line bottom end only with a long piece of float rubber. Depth plumbed, approximately 10-11 feet at approximately 18m, I began with 4 soft balls of groundbait ( Red Bream, Explosive feeder and River -equal proportions) and a couple of pouch fulls of hemp and wheat. A single ball was put on the 5m line with a good handful of wheat and a few maggots. I was hoping to avoid any of the carp that Boddington is famous for and target the quality roach. The banana went into action and the haze that greeted me began to lift as the sun got hotter, thankfully occasionally a very gentle breeze blew that made it a very pleasant day. 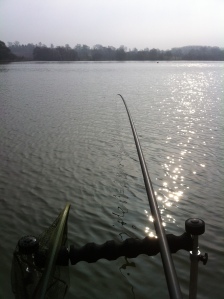 The float I was using was about 40cm long and had a multi-coloured tip for more than half that length. I had set the rig so the bulk was about 4feet above the hook with the no 8 and smaller stotzs strung out below that. As a consequence any bites on the drop were very easy to spot and by steady feeding I was soon getting bites that once again were all hit, but this time not landed!

The average stamp of fish you can see above. I was finding that barbless hooks of a wider gape did not suit the “banana” approach as I was dropping too many off, a quick change from the Tubertini 808 (size 20) to a Kamazan B611 (size 18) seemed to work. Another piece of the puzzle to lock away in my memory and ponder on.

After about an hour and a half I packed the banana away (to be honest I didn’t want anyone seeing me fish it!) and went over the same line with a waggler. Bites were still forthcoming but it was noticeable that bites on the drop were a lot harder to spot. I made a mental note to make up some wagglers with ultra long tips to see what effect that would have. Fish came steadily on the waggler and after the bailiff had come around and reported that the carp were not showing anywhere I packed the waggler up and decided to give myself the last 3 hours on the 5m whip.

I set the whip up with 0.12mm Shogun to a 0.10mm Shogun hook-length of  about 3feet. The float was going to be the smallest of the Chinese set – still over 36cm in length with an 18cm tip, set in the same manner as previously. I had about 9-10feet in depth so set the bulk of 3x BB and a No 4 at just below mid depth, followed by four droppers of a no 8 and then 3 x No 10 stotz, hook was a size 18 B611 barbless. I had been flicking wheat and maggots out whilst fishing  but still put another soft ball of groundbait in to begin. Bait was double maggot although I tried different combinations, double red was by far the best.

The next couple of hours shot by with a bite a chuck plus some quality fish (at least 4 roach around the pound mark, plus a bonus perch of a pound and a half plus). 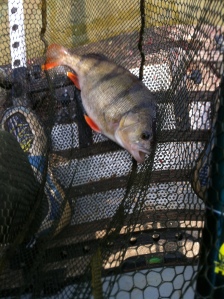 The average stamp of roach was around the 3-4oz mark and they were in all levels of the water but sitting at mid depth. How do I know- well the float was brilliant in so much as it accentuated any bites on the drop, making them incredibly easy to read, but I had a bit of help as a guy came down two pegs away and proceeded to cast out what looked like a black mini football into the reservoir with an almighty crash approximately every 5-10minutes for a couple of hours, then ignored it and looked at a tablet and his phone. When he packed up I asked him if it was a depth/fish finder he was testing and it indeed was. He was doing a test feature for a magazine and confirmed that the fish were sitting at all levels but mostly about 4 feet of the bottom. He found the test inconclusive as the bluetooth was not very consistent and kept cutting out so he was off to test it on a river and canal.

All in all a really enjoyable day with lots to ponder on. Bet it is blowing a gale on the match!

A thick fog greeted me on the day of our test fish, car packed with flask food, rucksack/seat and rest of the tackle I made my way to the meeting point. A couple were there before me and we had a quick walk down to take a look at the canal. With the fog beginning to lift we were not happy to see that the colour that had previously been in the canal had gone and you see right across the canal through the gin clear water. Things were not looking good! 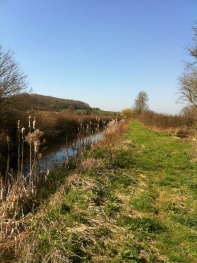 When we all arrived I set off and walked about 600 yards up the canal around a bend and stopped in the middle of a straight with hawthorn bushes opposite.

It did not look good when I found I only had about 2 1/2 feet of water at the deepest but I thought I had to give it a go. 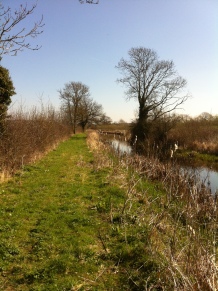 A couple of pinkies were catapulted out and a single red maggot on a 22 to 0.07mm soon joined them in the crystal clear water. To cut a long story short after two hours only two of us remained and I decided to have a walk further down the canal in case it showed any signs of life other than newts and ducks! Half a mile later I decided enough was enough- the water was devoid of anything resembling a fish with the bottom clear all across and of a similar depth, no where near the 4 1/2 feet we had been told. Apart from disturbing a couple of water voles there was no activity and the most telling thing was that there was no sign of any kingfishers. In this area, if there are fish, there are kingfishers in residence. Walking back I packed my stuff up and made my way back constantly looking for a sign of a fish – nado!

As a water it was ideal apart from the depth and no fish!

The club I belong to has been offered a stretch of newly refurbished disused canal. No information is available other than the owner thinks there are fish in it as a heron is often seen on the water! We have been invited to do a test fish in a couple of days time and I thought this may be an opportunity to look at how a new unknown water can be approached.

We had previously walked the length with the owner and in most parts it is between 10 and 13m wide with some colour in the water. The water has been in existence for 18 years but it is only recently that work has taken place to dig out the reeds that covered it and create a depth of approximately 4 and a half feet down the channel. No sign of fish when we walked the length but it was a cold February day when we did so.

My experience of similar waters has led me to adopt a different approach to the rest of the members who will turn up for the test fish – I am guessing they will turn up with their usual match gear and fish a pole or whip. On these unfished waters the disturbance on the bank plus having a pole over their heads can send any fish away to find shelter. So my plan is to take my trusty haversack seat, a few essentials in a plastic tub, a net bag, bucket with small box of maggots and one of pinkies and a little groundbait, oh and a few slices of bread; this will be teamed up with an 11ft Silstar Ian Heaps canal rod and landing net. I will let the others go first and then decide whether to walk to the far end of the stretch or stay at the near end where there is a wider section and the canal is blocked off. The groundbait will only be used as a last resort with loose feeding pinkies being my main line of attack.

We will see in a couple of days if the plan works! (or if there are any fish in there!)