October started with a holiday down in darkest Devon (no internet or phone signal) coming to an end at Bulworthy Lodges. The lodges are set into the wooded hillside on one side of a valley with a series of small lakes created by damming a stream at various points on its way down the hillside. Fishing wise it was an opportunity to relax and try out things. I had taken my usual holiday kit – similar to what I take to Bowood but had included the 5m Chinese whip and a 8ft Beastmaster carp /stalking rod.

The plan was to put out the Beastmaster as a sleeper with boilie or pellet on the hook alongside the solitary island on the main lake, while fishing pole  or whip for the hordes of roach that live there. The week flew by and saw me get two carp of 6-6 and 8-4 in between stacks of roach and skimmers. The swims were fizzing but not with fish but crayfish (both native and signal unusually)- single bubbles erupting at the surface heralded their arrival and it can only be said that they were a pain!

So back to Bowood and it appeared it was getting moodier than ever! My first two visits saw me get a jack pike of 4-4 plus some roach for a total of 7-8 from peg 11. Another visit to peg 11 saw me get one bite-one fish, a half ounce roach. After this I decided to more further afield and try on the opposite bank- a place I had never ventured.

behind the island (peg 18?). Plumbing up confirmed it was shallow and the water was gin clear. Pike rod was cast out 20m or so with a joey mackeral as bait beneath a pencil float, quickly followed by the waggler and some loose fed maggots. Two hours later the only thin g I had to show for my efforts was a missed run on the pike rod, nothing, nado, zilch on the waggler. I decided to move around the other side of the island in search of deeper water. As I packed up a bream of about 4lb swam serenely past the platform within touching distance- and kept on swimming! 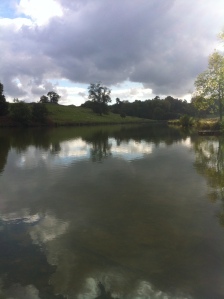 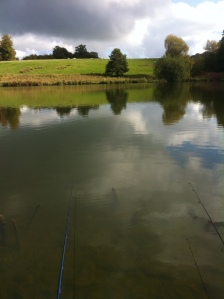 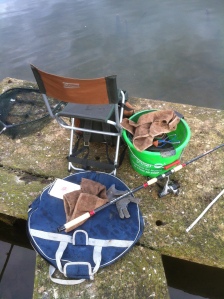 I plumbed up and found a drop off about 13m out into about 6 foot of water, pike rod cast to the side of the baited area, waggler cast out and little and often catapulted helpings of 5-6 maggots every couple of minutes saw nothing change. Then the bell struck two and the float buried- a roach of an ounce, next cast the bait reached the bottom and the float buried again- it was as if a tap had been turned on or the fish were waiting for the bell to sound so they could begin feeding! Then 3 bream in three casts followed by more roach until the bell sounded 3pm and the tap was magically turned off! In that hour I had 12 roach and 3 bream plus missed a couple of bites for 8-8.

Walking back there was a member fishing peg 8, on asking he had one bite exactly at 12:30 from a bream of 4-8. It was interesting as the bell chimes at quarter past, half past and quarter to the hour as well as marking the hour. Coincidence?

Later that week we had the opportunity to fish the public area of Bowood, so i made my usual trek down to the Lawns area, made all the easier this year as the keeper took pity on us and offered to transport our kit down. I began with 10 casts of the feeder at 50 turns to get a bed of groundbait and casters down then began on red maggot to see what response I could get. Small fish found the bait first and after an hour I rested the swim and had a look on the pole line that I had been priming- again small roach. The pike rod had been out  with no interest registering on the float. Back to the feeder and to cut a long story short I ended up with 6 bream and a tench of 3-14 for a total of 28-0, the bream came in a two hour burst over mid day then disappeared. No runs at all on the pike rod. I packed up at 4pm with a long trek back, this time with my kit!

I decided to give peg 11 another go on my next visit and managed to get one tench of 4-5 out on my 0.10mm hook length but lost a further two which took me into the still dense weed-bed to my right. A few roach saw me end the day with 5-5 and  attached to a double figure pike on the pole that enjoyed tail walking several times before finally biting through the line! No runs on the pike rod!!!

A further visit to peg 11 a few days later saw me finally get a run on the pike rod resulting in a pike of 8-8 and only one bite on the pole resulting in a bream of 2-12 for a total of 11-04. Another visit to the opposite bank was called for and this time I settled in peg 21(?) which was almost opposite 11 as I had spotted plenty of activity last time on this side. 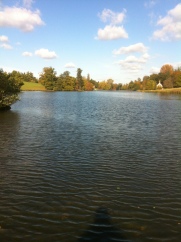 Pike rod cast just to the side of my pole line, I had a slow start and then began to get bites from roach when I had a run on the pike rod- a jack of 4-8- an hour later another run saw a pike of 8-12 find the net. On release this pike just lay sulking at the rear of the platform (21 is set out 10-12ft from the bank) for a good half hour before moving off.Again the roach disappeared and 14-08 was the return for the day.

Witherington Farm near Salisbury was my next outing- not to fish, but to coach a friend’s 11 year old who had only been fishing a couple of times (sea and trout) before I met him in August at a previous visit to Withy and had started him on pole fishing with some old kit I gave him. I always set a target when I am coaching and today’s was to beat his best total number of fish which was 18. Fishing peg 84 on the inner snake we set off at 8m (the most he can handle at present) with a 10 elastic but after a few lost fish, I gambled and put the same rig on a no 4 elastic to try and offset any loose line on shipping back. I also set up a margin rig with 0.20mm Shogun to a 12 in the hope of getting him a better carp. He had never landed his own fish previously so after the first couple he was shown what to do and there on in he landed all but one fish himself. Sod’s Law, as always, applied and he latched into a good carp that he had on for 3-4 minutes before the carp managed to put it’s turbo on and the line parted. The day ended with him getting a carp from the margins on paste of 7-6 (this was the one he did not net himself!) and a new pb  not only with the carp but a total of 23 fish.

Next day I was off to Shatterford, just outside Kidderminster, for a MatchFishing Scene organised silvers match on Stella Lake.It began raining when I got there and carried on until about 3pm when the sun came out. I was on peg 6 which was one of two exposed pegs on the lake. The lake did not fish up to expectations and my 53 fish (mainly gudgeon and small roach, with one “specimen” of 5 ounces on my first put in) went 3-1. Herbie, the organise, was on peg 12 and every time I looked up he had a carp on, great for a silvers match!

Bowood beckons for a last couple of outings before a trip to China!