9:45 I was back at the peg, minus the pike rod! I decided to set up a heavier float as the water was even murkier and looked as it was towing about. A 0.75g Paster was set up to 0.16 Shogun (so I could vary the hook lengths  more if needed)and 0.10 Shogun hook length with a size 18 Filstar F103N 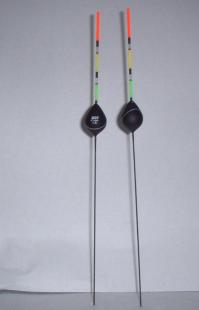 I decided to be positive (for me!) and cupped in 3 balls of Supercup Red, a half big pot of micros and then a cup of loose. Double bronze on and sat back to wait. 2 minutes later and a blade of about 2 ounces was in the net. Out again and another small skimmer of 3-4 ounces joined the other in the net. Third put in and float buried and 3 foot of white hydro came out, just as I was about to unship to the top kit the hook pulled! Cursing I took the maggots off and replaced them with an expander (4mm treated with pineapple Gel-it). Three minutes later and the float slowly sank and this time there was no mistake and bream 1 was in the net, quickly weighing the fish in the net the scales settled at 3-4.  (I always zero the scales against the net before I start and check after each fish). A good start.

The next 110 minutes saw 9 proper bream and 2 skimmers of 1-4 and 1-8 come to the net with only one further fish being lost. I  topped up with a ball of groundbait and handful of micros each time I had to wait more than 10minutes for a bite. At 5 past 12 the inevitable happened, – a roach, followed by a couple more blades signifying that the bream had moved on. With the wind and rain making life unpleasant I decided not to be greedy and packed up and trudged the 820 paces back to the car!

Result was  a 33-8 net – a nice early Christmas present from Bowood.

This year I joined Bowood Estate Lake for the first time. For those of you who have not heard of Bowood it is a stately home near Calne, Wiltshire which has a large private lake set in parklands landscaped by Capability Brown. The lake resembles a mis-shapen T with the vertical part short and the two horizonal pieces at a slight angle with the left hand piece being longer and wider than the right. Access is limited to 50 permits a year at £190 but fishing is only allowed on the right hand part of the T (both banks) and the bank of the vertical part that continues onto the right hand piece. (Clear as mud!).

View of the lake/walk from the car parking area.

Views from the “arm” looking towards the house in warmer times!

As you can tell there is a long walk involved to get to the fishing, 440 paces in first field, through a gate for another 60 paces, another gate then 60 paces to first platform. To get to the final platform you can fish on the car park side is 1120 paces!!

I had always baulked at the cost as with my other commitments I could not see me getting value for money  until now. With retirement it became a very cost effective venue as I live exactly 1 minute from the entrance gate and a further 2 minutes through the estate- so from getting into the car I could be parked and ready for the walk within 4 minutes. This season has seen  some fine days of bream and tench fishing coupled with quality roach. Interestingly I seem to attract pike when not fishing for them and to date have had 10 pike (biggest only 8-9-0) on sweetcorn and pole/waggler!

Anyway I had been unsuccessfully piking with deadbaits and had some on lures during November/December and had not been for a bit due to the run up to Christmas and various family visits so a week before Christmas  Eve I decided to have a couple of hours down there but to fish pole with pellet (something I had resisted in the warmer weather) and put a deadbait out also. The last platform in the middle field (820 paces) was to be my chosen peg with approx 7-8 foot of water at 10metres. The deadbaiting did not look so clever as the water had turned a chocolate colour with all the rain, so I was unsure how successful it would be. 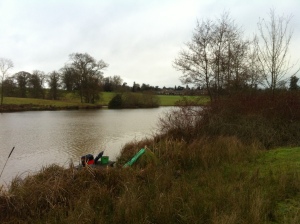 Anyway I put out a joey mackerel into the right hand margins and set about plumbing up. Rig was a home made diamond bodied float taking a no4, 2 x n0 8 and a no 10, 0.14 Shogun to a 0.10mm Shogun hooklength. A size 18 Filstar gilt hook completed the set up. Groundbait was three bags of leftovers taken from the freezer in the garage that were promptly mixed together.

A ball of groundbait the size of a tangerine, a half pot of micros and a handful of loose groundbait was deposited and  as the bells tolled 12 I set off with single bronze on the hook just to see if there was anything about! Bites were slow to come but I began to get a run of fish but then it would go quiet despite topping up and then the bites would return. I suspected that either pike were about (nothing on pike rod!) or there were bigger fish around. I  put a pellet (expander) on to see what would happen. Eventually the float buried and I lifted into a solid weight with a large amount of white hydro coming out of the end of the pole. I suspected pike as it kept deep and plodded whereas the bream tend to come higher in the water, 5 minutes later a pike of 7-10 lay in the net! 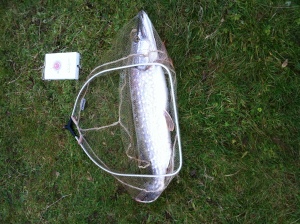 After returning Mr Esox I had a cup of coffee and potted in another helping of micros and put a pellet (expander) on to see what else would happen. A couple of small skimmers later I was thinking that I would need to pack up soon as the light was beginning to fade when the float buried and the white hydro this time indicated that a bream had snaffled my expander, a few moments later a bream of 3-12 lay in my net. Next put in saw a missed bite and then on my last put in of the day another bream of 3-4 fancied the expander.

This gave me food for thought so I threw in my remaining expanders and groundbait and resolved to return in the morning.

Doesn’t time fly! Looking back at the blog I realised that I had never had the opportunity to go back and do the second part of Bossing the swim – part 1 was January 2009!!!

The weather had been wet to say the least over the last weeks in November but the river was starting to fine down, although still up and pushing through. This time I opted for peg 13 above the top weir, a noted chub peg, but I was interested in picking up roach and perch at about 10m using an 18g Giant.

Set up was similar to previously except I had decided to try some 0.20 Fortex rather than my trusty Shogun, to see if it could cope with the rigours of Giant fishing. Hooklength was still 12 inches of 0.10mm Shogun to a 20 and the 18g was made up of small drilled bullets and a barrel lead that could move only about two inches between locking shot of BB (below) and AAA (above). A solitary no 4 was a dropper 4 inches from the hook. 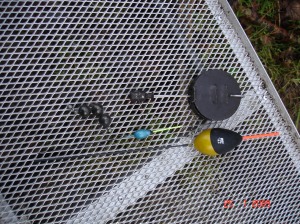 I decided to start with groundbait and 3 balls with some old squatt and home turned casters were cupped in at 10m. Bait was to be single red, I began by running the float through at the pace of the river just to get a feel of the swim then began inching it down the swim at different rates.

Third trot down I missed a bite (an improvement on my last attempt!) and finally found that if I held it steady in an area about 3m down the swim I would get the odd bite. It wasn’t until I put on a bronze maggot that I finally hooked into a fish, a roach of 3-4 ounces. Over the next two hours I managed to pick up 5 roach and two perch, topping up with a ball of groundbait every half hour or so.

Not a huge catch but satisfying as others were biteless and at least it showed the size of the float can work in adverse conditions. Lollipops, I hear you say, but I have found that the bites on the Giants are more positive than when using lollipops in similar conditions. Just another method in my armoury when a single fish is needed in a team match.

You know when you have a “bright” idea one day and it all goes wrong… Well read on!

I had the stupid idea of doing a short piece for the site on a method I have been using on the local river involving the use of my Giant floats, Now the usual pole float people use on the Bristol Avon at Sutton Benger is 1-1.5g, occasionally going up to 2 or 3g if it is pushing a bit. I have been using 5-6g floats on occasions but more regularly 18g monsters that I had made for some Irish customers to use in the Winter Leagues on the Erne. The rationale behind this was if I could control the float absolutely then I could deliver the “perfect” presentation for the roach, tench and bream that were my quarry.

I had a small window of opportunity before my work and junior angling club commitments took over so made the decision to go for it come what may. Well, you guessed it, Saturday came with a hard frost overnight and the river almost three foot up and rising, cursing I decided to do the shopping and chores and hoped that the river had stabilised by Sunday. Saturday night- it rained!

Dragged myself out of bed on Sunday morning and got myself sorted. Flask made, out into the garage to find that the score was now Mice 0 Me 1, sorted that out and reset the trap, loaded the car and set off thinking that at least it had warmed up.

The river was not looking good, about three foot up and a horrible colour but I walked up to peg 136 above the bottom weir and reminded myself that a bad day’s fishing was better than a good day at work and set about sorting myself out.

The swim was about 8 foot deep at 10 metres where there was a nice crease.

The picture shows the 18g Giant I was using, the other float is a 0.5g for comparison, my bulk consisted of 3 x 5g drilled bullets with a series of BB and AA shot either end as locking shot,. Size 20 hook (a Filstar version not available in the shops) was 12inches below the bulk with a single No 4 as dropper.

Main line was 0.20mm Shogun with a 0.10mm Shogun hooklength.

Worms were chopped and groundbait mixed as a standby.

Three droppers of chopped worm went out at 10m and I shipped out and prayed that something would show an interest. ! I was able to present my bait at what ever pace I wanted and was able to nail it still if needed but to no avail!

Four hours and four cups of coffee later and still without a bite, despite also introducing groundbait, I gave up – deciding to return when the river was more obliging. Hopefully during half-term (I’m a teacher for my sins!) I’ll return and finish what I intended!