The start of February arrives with Gareth et al still here thanks to the Corona virus. We managed a short session on pegs 12 for me and 11 for Gareth. Gareth missed 2 runs and had 48 small fish for 2-0 while I had no interest from the pike but had 31 roach and 22 rudd for 2-2. They were SMALL!

Two days later back again for a couple of hours late in afternoon same results- Gareth missed two runs on 11 and had 25 small fish, while I had no interest on 12 but had 21 roach, 8 rudd and a blade for 1-4. It is worth mentioning that we were fishing two single hooks on the wire trace as I have stopped using trebles, this does lead to more runs being missed but it is so much better unhooking the fish.

Next day we decided to take Zach to the Pondtail to catch his first fish, so strapped in to Gareth chest we went on the first platform 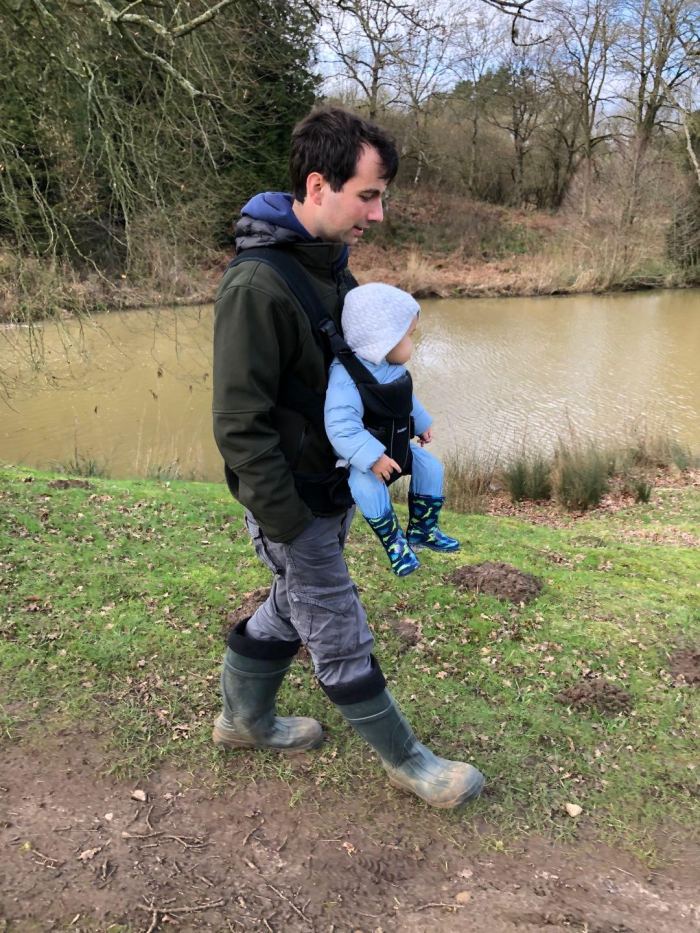 armed with a 3m whip, a bag of mixed groundbait and a pot of maggots. A nugget of groundbait with 3-4 maggots was put in every couple of minutes and eventually after 5 minutes the float dipped and was missed! Next put in and…

Mission accomplished, Gareth went off with the others for a walk down the lake leaving me to amass another 21roach and a hybrid in the next half hour.

We made the decision after this visit to forget the poles and just take the pike rods and whips for future visits as the sessions would be 2 hours at best. Next afternoon the plan was put into action with me on 12 and Gareth on 11 (his choice). Fishing 4m whips I had 15 roach and 15 rudd for 1-3 but also had pike of 11-0,9-0 and 5-0, Gareth on 11 had pike of 8-2 a bream of 2-7 plus another pound of small roach and rudd on the whip.  Double maggot was the only bait to attract the silvers, no bites on single at all.

Sunday should have been round 5 of the Port Talbot Docks Winter League but the organisers had called it off on the Wednesday as the extent of Dennis became known, this led to the owner cancelling the rest of the matches as he felt they should have waited longer before cancelling. The result being that the 4 matches fished counted and the league ended with me in 9th and Darren in 7th spot. Can’t help feel sorry for the organisers as they were proven correct in their assessment!

Dennis came and went, trees were down and needed to be cleared on the estate roads and the water went very murky. Wednesday saw us on the usual pegs but me on 11 this time.No runs which was not surprising given the water but 14 blades and 5 roach on the whip for me for 1-6 while Gareth had a skimmer of 1-4 and 5 blades for 2-0. Two days later we had 2 hours on the Pondtail, with Gareth fishing feeder and worm in the hope of getting a  bream, I plugged away on the whip on the first peg for 21 roach for 2-6, Gareth managed 2 roach on the worm. It was four days later we managed another short session, again I went on 11 and had a skimmer of 1-4, 7 roach and a hybrid for 2-1 while Gareth struggled in the wind and rain on 12 for just 3 roach, we packed up after an hour and a half in a break from the rain as we could see another heavy system approaching, just making it back to the car before it came down!

Another short session the following day on Pondtail, again Gareth fished the feeder and had 10 roach, I managed 37 roach, 2 perch and 7 gudgeon for 4-2 on the whip. Friday sees us having a slightly longer session of 2.5 hours, I was again on 11, managing two pike on the sardine both fish remarkably weighing exactly the same at 6-9, the small fish had disappeared and I had 4 fish on the whip, 3 small roach and a stonking 1-0 roach. Meanwhile Gareth had 3 roach on the whip  and a pike of 8-4. 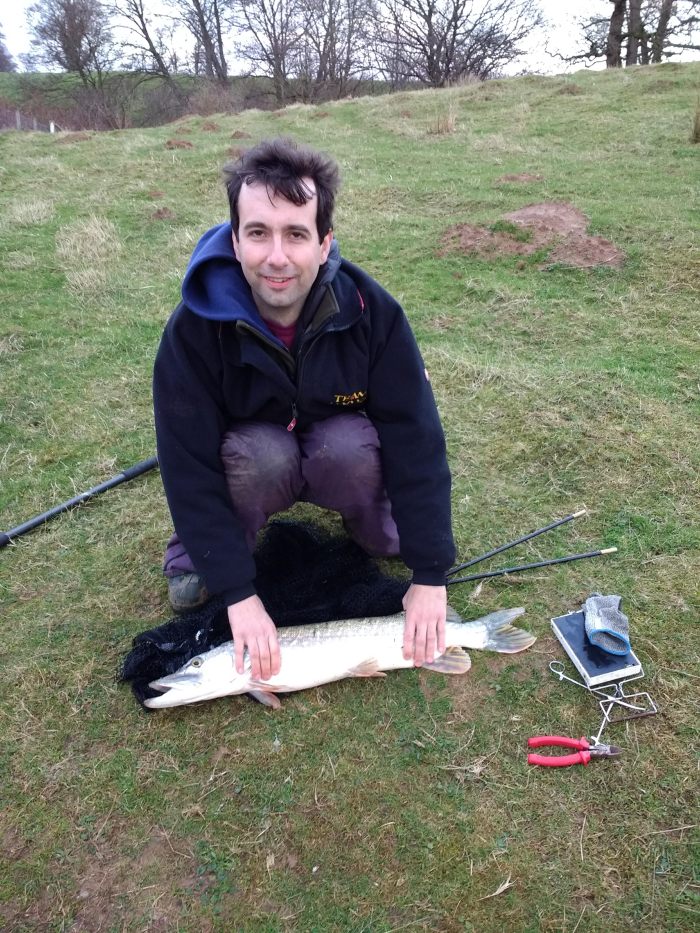 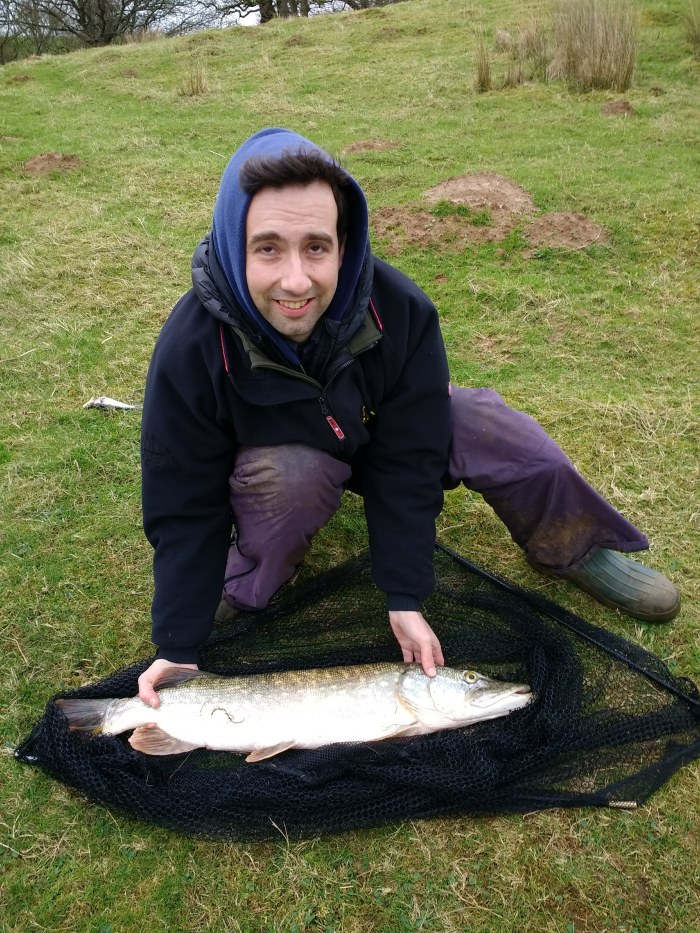 Finally things were getting back to a semblance of normality in China and Gareth had booked tickets to leave on  Thursday 27 (43 days after arriving for a 13 day stay!) so we only managed one further session at Bowood, again on 11 and 12, I fished 11 and again had a skimmer of 1-4 on the whip plus 10roach, a perch and a blade for 2-6, Gareth had 10 small roach and blades for 0-8 from the murky water. It was probably the coldest I have felt there in a long time with icy rain sweeping into our faces. Needless to say no pike!

As I write this, they have arrived back in China safely, Zachary probably expresses it best…

The New Year  saw me back in the rut – peg 12, but it threw up a hectic session with 76 roach and 6 rudd  for the princely weight of 2-12! But also two pike of 8-6 and 6-8. Back to 12 on the Monday sees a change to gale force winds and chocolate for water, 33 roach and 7 rudd were winkled out at 2+2 as I couldn’t control the pole at 10m! Again small fish for a 1-8 weight – I gave up after 2 hours as I just couldn’t control even 2+2.The weather continued to create havoc and it was the Friday that saw me back at 12, later joined by another regular on 11, both of us biteless in the 4 hours I fished.

Time to brush off any New Year blues and head off to Port Talbot, as usual it was raining when we met to transfer the kit to one car and stopped once we got going! As soon as we hit Bridgend we hit biblical rain but fortunately we managed to drive out of it and it was only light drizzle when we arrived at Bros Cafe for the draw. On the way down Darren asked what peg I fancied and I replied that I would like one down the bottom end for a change but not really bothered as long as I didn’t get peg 7 – what did I draw -peg 7, Darren fared a little better and drew end peg 3. Last time I could not get the whip or pole line to work and had to scratch for 25 fish mainly on the feeder, still it was a new day and I had to get positive about it or I would be beaten before I started!

I began the match with 8 jaffas laced with micros, dead reds and casters at 8m and put 2 similar jaffas at 4m on the whip line. Starting on the margin pole at 8m it was 5minutes before I got my first bite, a 2oz roach, this was followed at intervals with more roach and the odd perch before slowing right down after an hour and only 10 fish in the net. Onto the whip line that I had been feeding with loose hemp and the occasional nugget of groundbait, a slow run of roach and perch saw me finish the second hour on 30 fish, the third hour started slowly and prompted me to try the 8m line again only to get a roach first put in then nothing. On to the feeder at 20 turns and again slow with just two roach, one on worm the other on maggot (during this spell the heavens opened and we had a patch of rain and hailstones for about 15-20 minutes), at this point I decided to cut my losses and stick on the whip.The end of the third hour saw me on 37 fish. The fourth hour was totally different weather wise as the sun came out and shone directly down the dock onto peg 7 so I was having trouble seeing the colour of my maggots let alone the float, adjusting the feeding so it was more of a 1m strip in front of me I alternated the glare free areas to finish the fourth hour on 55 fish.

The final hour started slowly but 37 roach in the last 40 minutes saw me finish on 97 fish. I had not had a single net fish or skimmer. Darren weighed in first with 12-3 he said he had 103 fish but crucially he had caught some skimmers- including two in the last 10 minutes to boost his weight. Mel on peg 4 weighed in 14-1, peg 6 weighed in 8-0, my fish went 9-2. Peg 8 on the headland had been catching well all day on the feeder and weighed in 20-4 for a match win, the rest of the weights were very close with 5 weights between 11 and 12lb, then several in the 16-18lb region.
Going home and reflecting on the match, we agreed that despite being newcomers we were not too far off the pace and just need to have a reasonable draw, two matches left to make a difference
The Wednesday saw the arrival of Gareth accompanied by his wife Wendy and my grandson Zachary from China. Sunday sees us grab a few hours at Bowood Gareth fishing 12 and I went on 11. The water was a better colour now and somehow the fish had moved down to 11, I had one pike of 5-15, a skimmer of 1-12 and 12 roach (1-5-8), whilst Gareth didn’t get a run and had to make do with15 roach. Back the next day for another short session, I went on 11 again and had 5 roach, while Gareth fished 12 and had 1 roach but as we were packing up hit a run on the pike rod which resulted in an 11lbe. 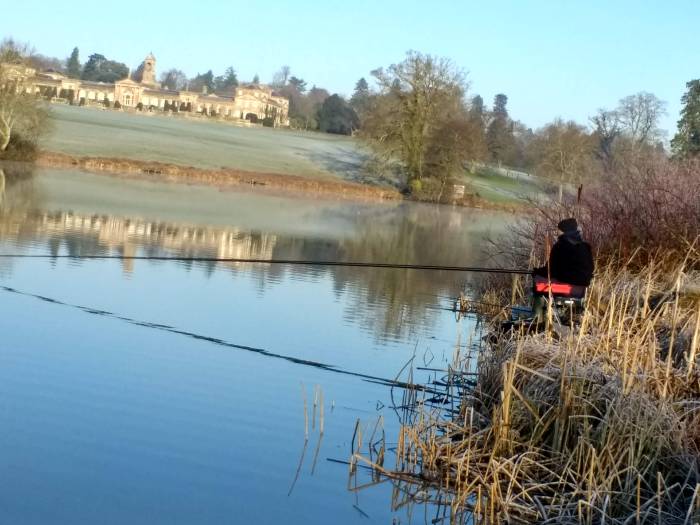 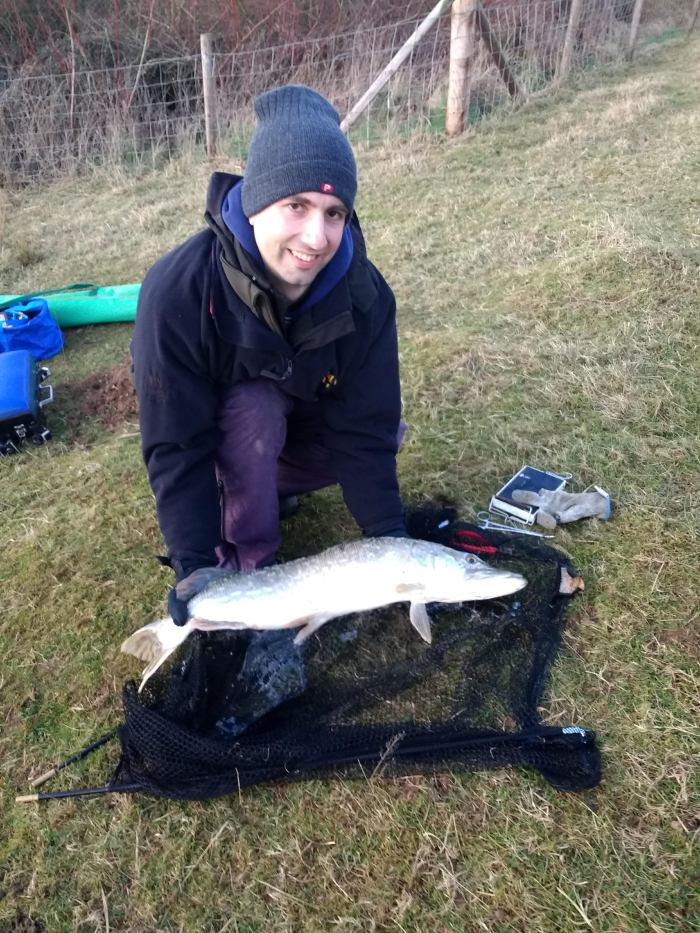 A few days later we managed another short session with me on 11 and Gareth on 12, this time I had a a pike of 6-2 and 10 roach, while Gareth managed pike of 4-0 and 5-14 plus a clutch of roach, rudd and blades for 2-2.
Sunday sees us arrive for a late afternoon session with Gareth due to go back on the Tuesday, unfortunately there was another angler on 12 with a float also on 11 so we fished the shallower pegs, me on 9 and Gareth on 10. We had no pike although the angler on 12 had 4 small samples in the 2 hours we were there, but we were kept busy with small roach and rudd, I finished with 22roach and 15 rudd for 1-12 while Gareth had 15roach and 5 rudd for 1-8.
The corona virus then disrupted plans as the advice from Zhongshan was not to return as everything was shutting down! Wendy works as a manager in a hospital and the advice came from her colleagues. So plane tickets were cancelled and bags unpacked, the silver lining was we had more time with Zachary and the chance to go fishing a few more times. The day after they should have left we were back at Bowood for a another short late afternoon session, with Gareth on 12 and me on 11. Gareth had a bream of 1-8 and 9 roach and 1 rudd for 012, while I sneakily managed to get skimmers of 1-4 and 1-0 plus 10 roach and a rudd for 1-2 plus a pike of 9-1. All the pike were taken on a double single hook rig and sardine bait.
As I write this tickets have been booked to return and then two hours later cancelled following the Foreign Office statement that Britons should leave China!  We will see what February brings, will they still be here?