Skip to content
HomeAugust 2020 -part 2 (careful what you wish for!)

Lat time I was looking forward to the onset of winter as I don’t like hot weather or I should say it doesn’t like me! A few more days of hot days sees me venture out for a Saturday morning short session on the Pondtail. This time on peg 2 and only fishing the feeder. Casting down the lake to the edge of the weed bed 30m to my right and 40m out it was slow going but ended up getting 15 roach for 2-4. I had a couple of cast straight out in front and managed to hook a good fish that I am guessing was a carp that took me into a patch of lilies before parting company. That signaled the end of my session and I scuttled off home!

The weather now breaks but I am stuck in for the week, Friday being my only opportunity to get out and guess what – the heavens open and we get  biblical rain! I don’t mind fishing in the rain but the next day I was on the Canal Pairs qualifier at Hungerford and wanted to keep my waterproofs dry until then! Next day parked up at Hungerford near the Borough Arms where the draw was scheduled, Darren my partner arrived and we went up only to find the pub all locked up with no-one around. Quick check on the web-site and no mention of any changes, Darren phones the organiser and gets voicemail so leaves a message. Next thing a van drives by and stops – Richard Chave- recognised us from previous matches and tells us to follow him as the draw was changed as the pub was not big enough given the covid situation. Would have been nice for that to have been put on web-site! Anyway we managed to get to the draw in plenty of time and organiser apologised, think he must have felt guilty as we were the first pair to be called up to draw. At the draw he had mentioned that they had had a problem with wasp nests, one on B section was right on a peg but the nest had been destroyed/removed, the other was on A section but it was still there as it was between A8 and A9, what did I draw- A9.

At least drawing first gave me plenty of time to get to the peg and set up. The peg looked nice with overhanging branches on the far bank. 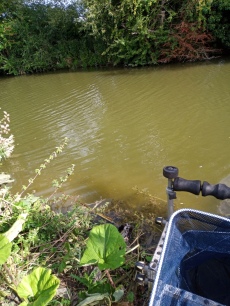 I knew that I would not compete in a small fish race with the likes of James Carty, Gary Etheridge and Richard Chave, who all had walked past me so decided to set my stall out for skimmers and perch that I knew frequented the area. I set up 4 rigs, one for squatt/pinkie across, one for skimmers across and two track rigs a lighter one for anything that swam and a heavier set up for fishing worm and the bonus perch. I discounted the inside line as the tow path was very narrow and there had been a lot of disturbance with the other anglers going to their pegs and walkers.

Anyway the match started and to cut a long story short I struggled as the roach were microscopic as were the gudgeon, I started on the track line while feeding across for later and lost more small fish than I have for ages, I began to wonder if they were not hooked but just holding on to the pinkie!

I only had a couple of small roach across, no interest in the caster and caught mostly down the track over my ground bait line, I had fed another line to the right with a fish meal groundbait and loose fed micros. Worm produced nothing when first tried but an hour later 2 perch, the first about an ounce, the second about a pound, then nothing. The match ended with 22 roach, 7 gudgeon, 12 skimmers, a ruffe and the two perch for a 3-6 total and no wasp stings despite them being a constant companion. A8 had 3-5 and A10 following a good start had 5-4. Talking afterwards with the angler on A8 who was local it seemed the two pegs we had drawn were very good winter pegs and he had caught well on the inside before going down the track! James came down and had weighed in 200 roach for a 6lb weight, Richard had similar and had just pipped him but Gary on the end peg had 11lb. Darren on B section had a similar experience and weighed in 3-5.

It was Wednesday before I could get out again- a short afternoon session on the Pondtail peg1, but this time I just took the whips. I decided to fish the 4m whip that I had set up for Port Talbot Docks with a 3g Paster. Now this may seem excessive in 7ft of water but I don’t subscribe to the fashion of fishing as light a float as you can get away with. I think this stems from years ago catching half ounce rudd in the docks which were holding up an 18g float! I would rather fish with a float that can “boss” the conditions rather than fly on the edge of acceptable. Anyway two balls of groundbait went in and caster and wheat were loose fed every put in. Starting on double maggot, I was soon catching roach and by swapping the hook bait from maggot to caster to wheat to pinkie and rotating the fish kept coming. I stopped at 100 fish after 2 and three quarter hours, 85 roach (best 14oz-weighed), 13 gudgeon and 2 perch for a weight of 10-14.

August was quickly going and I made the most of the last few days by going three days running. Firstly a return to the Pondtail peg 1 again on the whip for a 3 hour session. Slower this time but 50 roach, 26 gudgeon and 6 perch weighed in at 8-02, best roach this time 10oz. I do like using the Chinese whips as they have the capacity to bend right around if needed and have a far nicer action in my mind than the European versions.

Saturday sees me complete the first part of my mission to fish every peg this season with me visiting peg 20. This now leaves only the island pegs to complete that side (unless peg 15 becomes fishable at some point). I plumbed up carefully and found a flat spot on the slope at 10m. The wind was strong but coming into me before being funneled down the arm of the lake so holding the pole was better than expected. I decided to attack the peg a bit more than usual as I knew bream had been caught in the area. Five balls laced with squatt and micros were deposited along with half a pot of wheat micros and a dozen kernels of corn. I had set up a 1g home made float with a 2mm red and yellow tip, the bulk set 2 feet from the hook and 3 no 8 droppers to a 16 hook.

Ten minutes in and things were looking up – no bites, this may sound odd but usually if there are no larger fish around the corn is attacked by small rudd and roach, a period of no bites told me there was a chance of something better (as long as it wasn’t a pike!). Fifteen minutes in and the float disappears, a gentle lift sees the elastic come out and a 3-12 bream come to the net after a scrappy fight. Ten minutes later another bite results in a smaller bream of 2-3. Then a few roach and rudd appear- a signal to top up with a ball of groundbait to supplement the wheat I was loose feeding. This was the case for the rest of the session, bream of 2-5,1-15,1-8,3-0 and 2-2 followed interspersed with 20 roach to 10oz and 16 rudd- the bream went 16-13 while the rest weighed in at 6-10 making a 23-07 total. 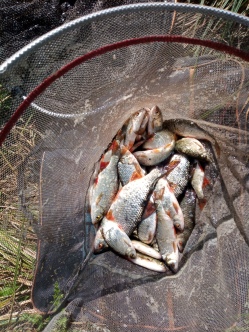 Next day sees me head up to peg 9 (only peg 10-my favorite- left for the right hand field). For once I did not have the lake to myself with an angler on 10. A quick chat and checking he was okay with me dropping in 9 I set up with the same rig as the day before. The wind now was a cross wind from right to left and I opted to feed 4 balls this time, loose feeding wheat over the top. No such luck this time with rudd attacking the corn immediately!

The session went slowly with me catching 2-3 then a lull then another 2-3, etc I ended up with 15r, 5 rudd, 2 hybrids and 2 skimmers for 5-04. I was sure there was something bigger down there but no response from whatever it was. You can see my “pole-roller” for Bowood in the photo. I opted out of going on Bank Holiday Monday, so my August is complete. September awaits with 3 days at the Glebe for the Monkees v Shandees and perhaps an assault on the top field (pegs 11-14).