Two days later I was back in the twenties, I have made myself a target of fishing every peg at least once this year and I wanted to get the twenties out of the way before the summer was over. Peg 24, opposite 4 and 5, was my choice for the session and as it was still quite shallow I had brought the spinning rod should any pike show. 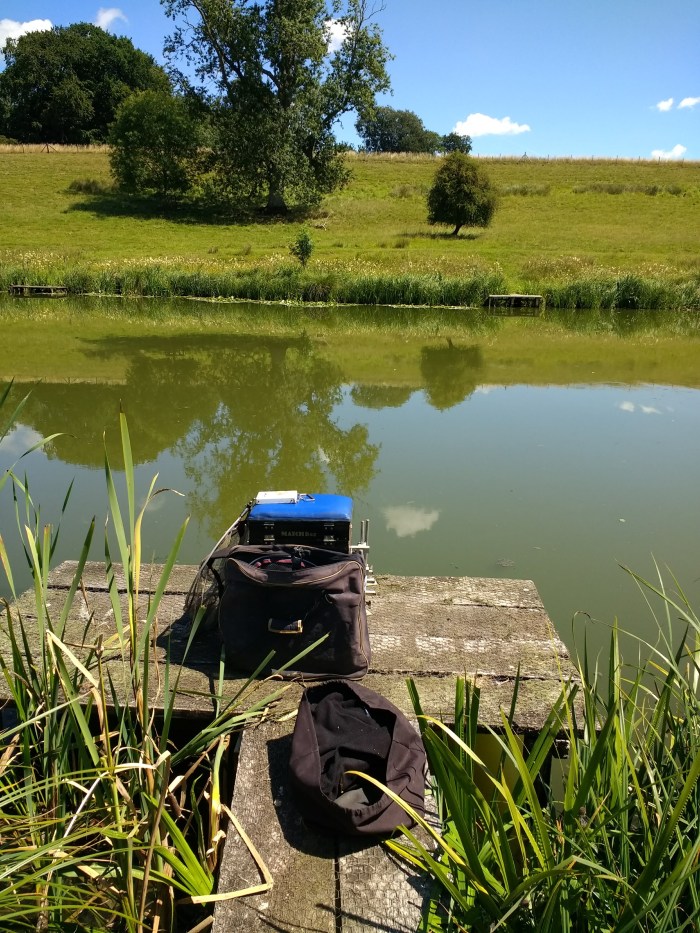 The same rig used on peg 3 came into play and with approx 2.5ft of water I cupped in 3 balls and deposited half a cup of 2mm pellets and wheat with a dozen kernels of corn at 11.5m and went out on the corn. The usual dips and plucks from the fry began but then halted after 20 minutes; the float lifted and a bream of 2-4 was gracing the net after a spirited fight. Ten minutes later the same scenario but this time one of 1-12. It then went quiet, thinking there may be a pike around the spinning rod came into play but no interest there. Back on to the corn and 4 rudd and 1 roach was all I could muster. Decided to have a last few casts on the spinning rod before packing up and fourth cast in a scrappy jack took the lure, I thought it looked 12oz but on the scales it went 1-8! Anyway that was that and I trudged back to the car with a total of 5-12. 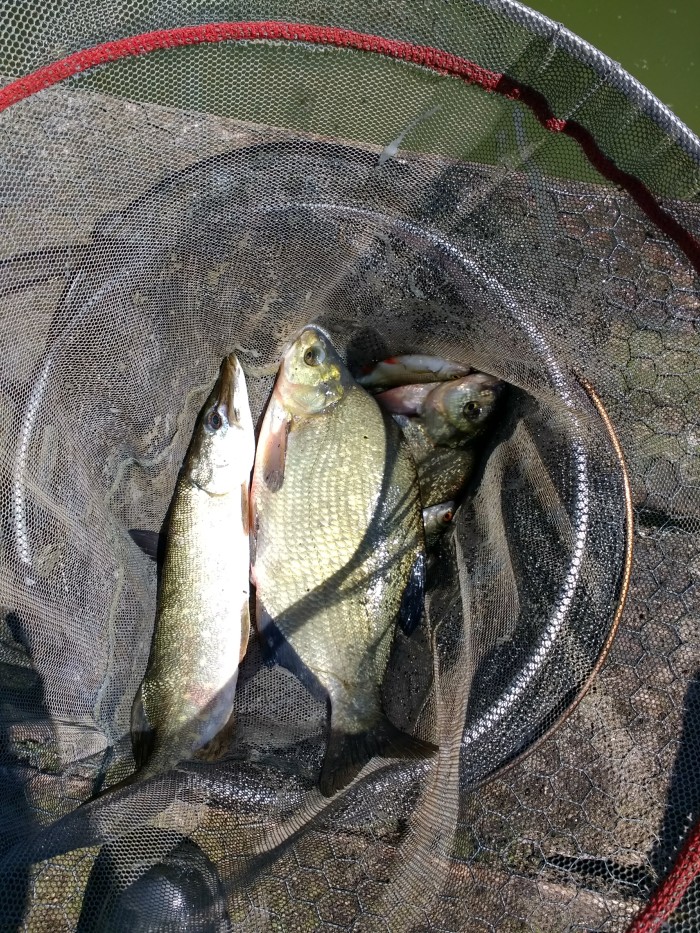 That morning I had spotted some carp and bream by the bridge in the Pondtail and had decided to have a go at them, so the next day I had the unusual luxury of a very short walk from the car to the first peg on the Pondtail. I had left the pole at home and decided to fish a method towards the reeds by the bridge and a waggler for the roach in front of me.

Setting up a 20g in-line method with a .20mm Shogun hooklength to a 14 with a bayonet, I was planning on trying 8mm and 10mm boilies/wafters  with Swinstim being the groundbait for the method. The float was set up with a 2AA peacock waggler with just 2 number 10 shot on the line . Plumbing up I had 6 feet of water at 2 rod lengths and I kick started that swim with a ball of groundbait (not the Swimstim) and about 40 pieces of wheat. I began by putting the method out with a 10mm white shellfish boilie and went straight on the maggot on the float. The Pondtail is chocked full of roach but it was very hard going, 20 minutes before I had a bite on the maggot, and after the first hour on the float I had only 4 gudgeon and 4 roach.However the method had surprised me as in the same time I had a roach of 14oz on the shellfish  boilie and a hybrid of 1-9. In the next hour I changed to wheat on the float and it was like a tap was turned on, with bites every cast, the second hour saw me adding a further 2 gudgeon and 11 roach to the net, it would have been more but I had missed a bite on the method with an 8mm white pop-up but on changing to a chocolate orange 10mm wafter I had added a roach of exactly a pound, a further hybrid of 1-6 and lost another unknown fish. At this point I dispensed with the float and concentrated on the method as the sun was getting higher and I felt I only had another 45 minutes before any shade would be lost. Next cast nothing. Followed by another, then a good wrap round and I was into a better fish which after a short scrap turned out to be a carp of 3lb. Two further casts were motionless and I called it a day with a 9-13 total. 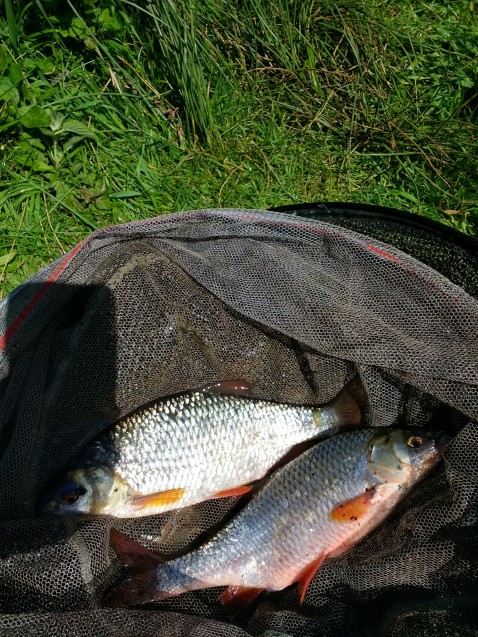 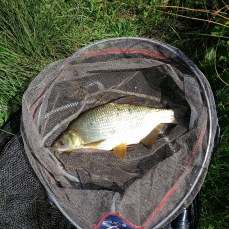 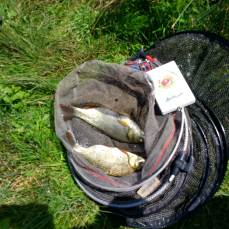 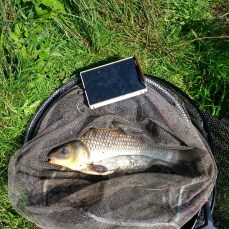 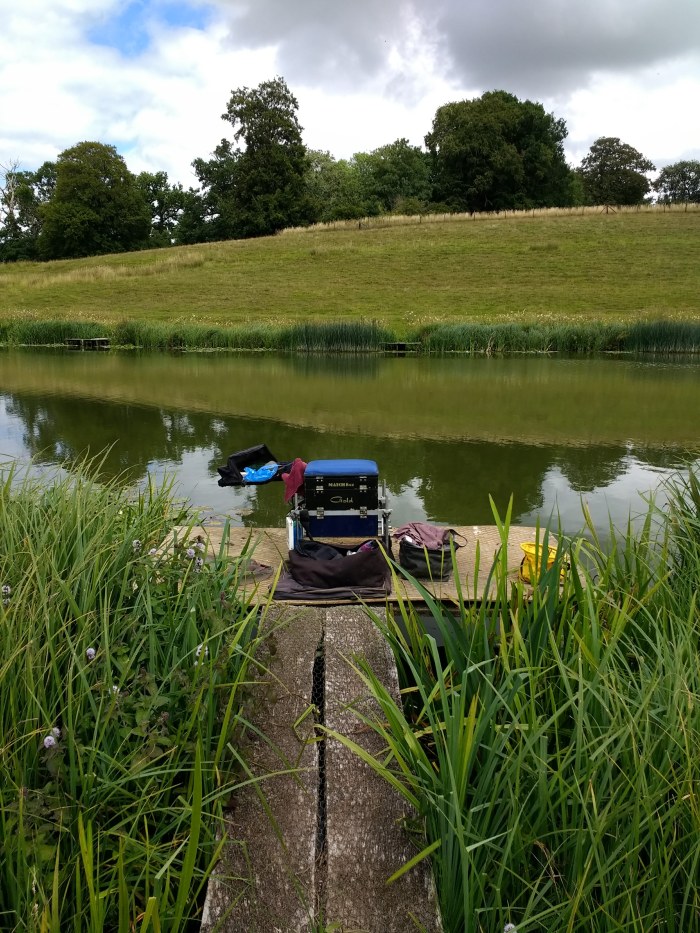 Depth was a more reasonable 4 feet but I went for the slightly heavier rig. Starting in my usual fashion I had a couple of early rudd then it went quiet. A lift of the float and the elastic came out as a bream tried unsuccessfully to get to the far bank! A short fight only made more difficult by an unseen weed bed close in that the bream knew all about but I didn’t, resulted in me slipping the net under  a bream of 2-4. Twenty minutes passed before the next bite, a rudd. The odd rudd and roach made an infrequent appearance before the float lifted and a far weightier fish stretched the elastic, this took longer but a tench of 4-10 soon was in the net. 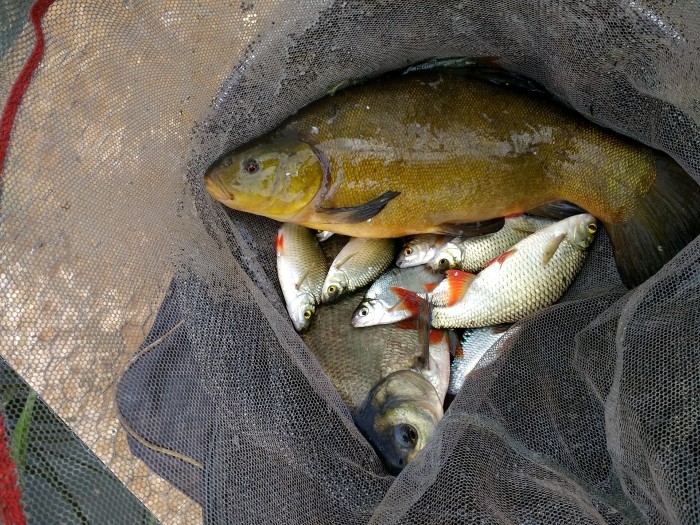 A few more rudd followed and I ended with just the 8 rudd, 3 roach and a small skimmer giving an 8-8 total.

Back to the Pondtail on the Sunday, armed only with a method rod!(mistake!) The plan was to fish until midday, so at best 3 hours. The first hour resulted in one missed wrap round and nothing else. The second hour was not much better but I did hook my solitary bite, a good carp by the feel of it, I managed to keep it out of the rushes by the bridge but it found the one snag in open water and parted company with me! The final hour saw a  motionless tip and a blank was saved by a foul hooked roach!

Tuesday saw me back on the twenties – 22 for the session. 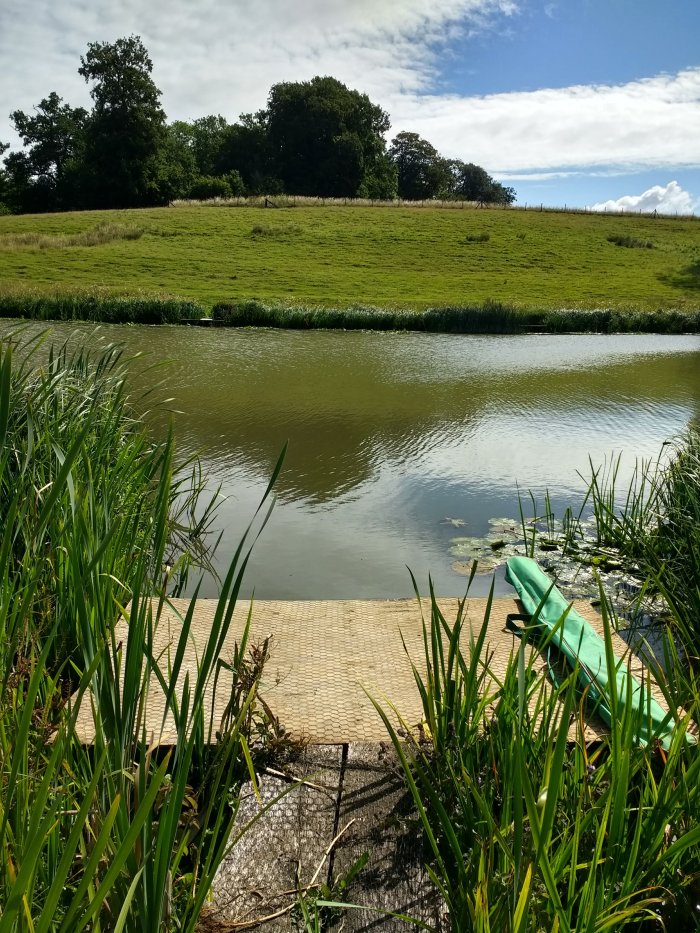 Starting the usual way it was very slow on corn, not even dips and bumps from the fry, a change to double wheat saw a change in fortune and 22 roach, 9 rudd and a skimmer for 4-12.  Next day I returned to fish peg 3. There had been some rain during the day and overnight on the Monday and I reckoned the colour would be suited to the shallow pegs. Starting off in my regular way I was soon into roach and rudd on the corn, the swim then went quiet and some typical tench bubbles started to appear, a couple of minutes passed when the float lifted and a tench was hooked, not a massive one but given the weedy nature of the peg it was a tussle to get it into netting range, it slipped into the net then darted out again before the hook pulled! Forty minutes later another tench hooked, this one made a beeline for the lillies 12m to my right, I managed to get it away from the lillies then knitted one and purled one through the weed in front of me to finally net this one at 4-4. 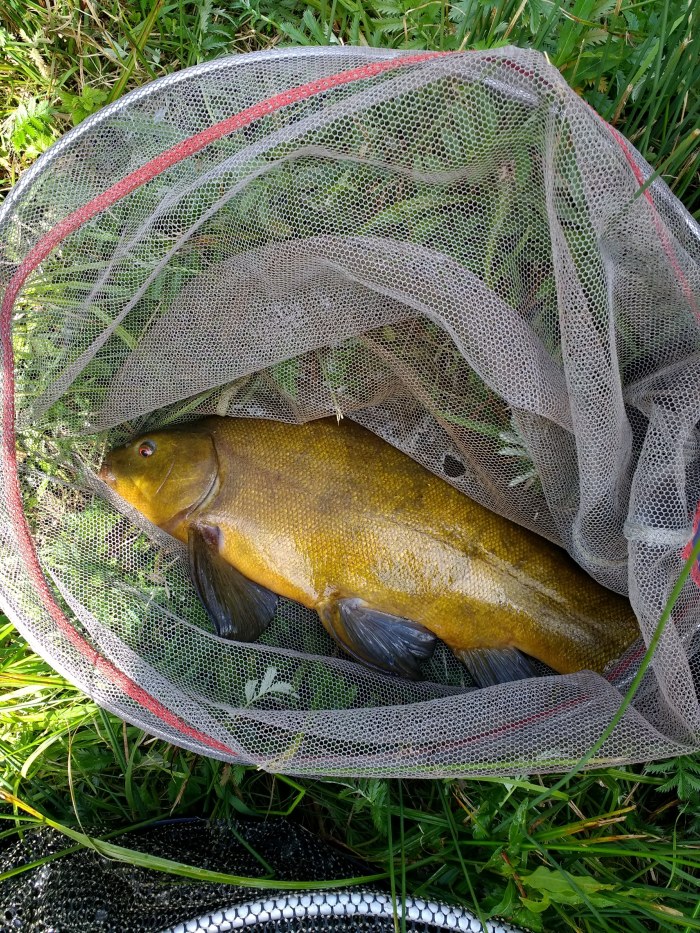 A few more roach and rudd came before I hit into another good fish that led me a merry dance through the weeds, finally surfacing it was a good bream close to 5lb, as I drew it to the net the hook popped out agonisingly short of the net. I was not a happy bunny! The session ended with me on 20 rudd, 16 roach and 3 skimmers for 9-6. 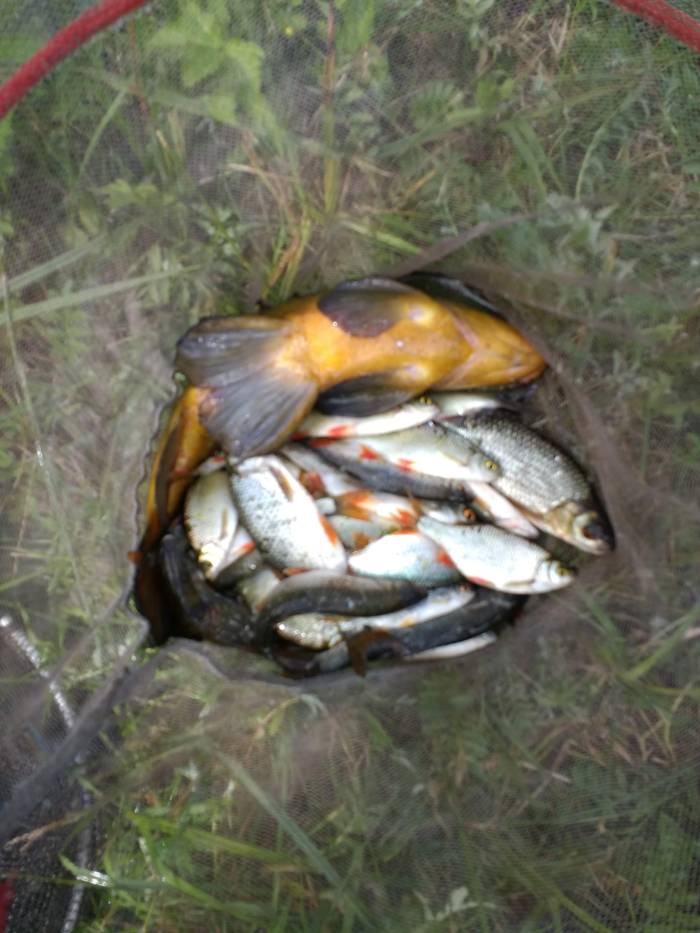 Friday, the last day of July sees me at the Pondtail for a short session on what was promising to be the hottest day of the year for the area, again just the method but this time I blanked, I had one bite on the fourth cast that I didn’t hook and that was it ! A blank! I lasted a little over two hours before I felt I was melting and went home!