July did not start well due to two new sofas being ordered and only one delivered as the courier had lost one! So it was not until the first Sunday that I managed to get out.  Bowood was very quiet and I walked up to peg 6 for a change. Setting up with a slightly heavier float in the 4-5ft of water I again bulked the shot six inches from the hook to counteract any weed and small fish on the surface, I began by introducing three balls of groundbait (1 part lake, 1 part vanilla, 1 part coco belgique, from the Caperlan range), and a dozen grains of corn along with a handful of 2mm pellets and a similar quantity of wheat. Second put in and the float lifted, a gentle lift saw the elastic (KND hybrid 8-12)  come out and a small bream of 1-10 come to the net. Unfortunately that was not the start of a bagging session, instead the morning progressed slowly as before with pike scattering fish on a regular basis. I ended up with 5 roach, 4 rudd, 14 small skimmers, 1 hybrid and that bream for 4-12.

Undeterred I was back the following day this time on peg 5, similar set up and approach same result but no bream – 26 roach, 33 rudd and 5 skimmers for 5-1 and a great deal more pike activity.

Friday was my next chance and I made my way up to peg 7, this time with a spinning rod in attendance. Similar approach ending in 30 rudd, 16 roach, 6 skimmers and a hybrid for 7-1. This time I tried spinning every now and again to no avail apart from one take that was on for 10 seconds before throwing the hook!

Sunday saw me travel up the M5 and M6 to Bromley Mill lake near Stoke for a Match-fishing Scene match organised by Les Hobson. I had been told it was shallow and you would need to sit in the water to get depth for your keepnets- three of which had to be put in at the start! I drew peg 7 which was the furthest walk and according to Les the match the previous day had been a struggle for those further down the lake. The arrow in the picture is where I drew- for some reason I forgot to take any other snaps!

When I set up I found there were carp coming right in to the keepnets- Les had warned us of this and said some would swim under your box! I had 3 foot of water at 10m which is all the regulars fish usually and 14 inches off to my right at 5m. I began on the method but after 20 minutes with little indication gave that up and went on the pole. After an hour with no bites and a brief dalliance at the end of my keepnets I decided on a change. I had noticed a lot of carp moved through the swim from the right, so dumped a half pot of 2mm pellets and wheat off to my right about 4m out from the bank and a small nugget of Swimstim groundbait and left it for 5minutes allowing the fish to find it (which didn’t take long) and get their heads down. The next 10 minutes were frustrating as carp were all over my single corn bait but not taking it. Change to double corn and still no response. I finally had a bite and bumped it! Now an hour and a half into the match and blanking whereas others were catching on a fairly regular basis. I then hit upon the idea of putting all the shot under the float so the bait was not tethered in a position. First put in the carp swirled around the float looking for the wheat I was feeding every put in, this time the whole rig moved to a new position in the aftermath of the carps swirls, 5 secs later the float buried and the 14-16 yellow Slik elastic was called into action. A carp of about 4lb was deposited in the net, another handful of wheat was thrown into the area and single corn put on the hook, 5minutes later carp number 2 went into the net.  So it carried on for the rest of the match until the last 15 minutes, by which stage I had caught 20 carp and lost 6, but had managed to snap the last 2 inches off my number4 section (it was already splintered and weak being 20+years old) and had replaced it with a short number 4 that didn’t really suit the top kits and I was having to make sure it was securely in place before shipping out. The inevitable happened I hook a carp, carp runs to my left and I start to bring it back with a nice angle between tip and carp, glance around to make certain of getting pole onto roller and in that instant carp changes direction, angle is lost and the top kit flies off towards the centre of the lake. Unwilling to risk another kit I put a small bomb over the feed area but no further fish by the time of the whistle going.

I was first to weigh in and that may be why I didn’t take any photos plus still aggrieved at losing the top-kit (at least the barbless hook would mean the carp would soon divest itself of the top-kit). The scales showed I had managed 94-6 for fourth overall and lost the section money to Les who had 102lb. An enjoyable day out and lots to think over on the 2.5hour journey home.

Wednesday sees me sufficiently recovered to venture to Bowood. Now this time I was going to peg 21 – 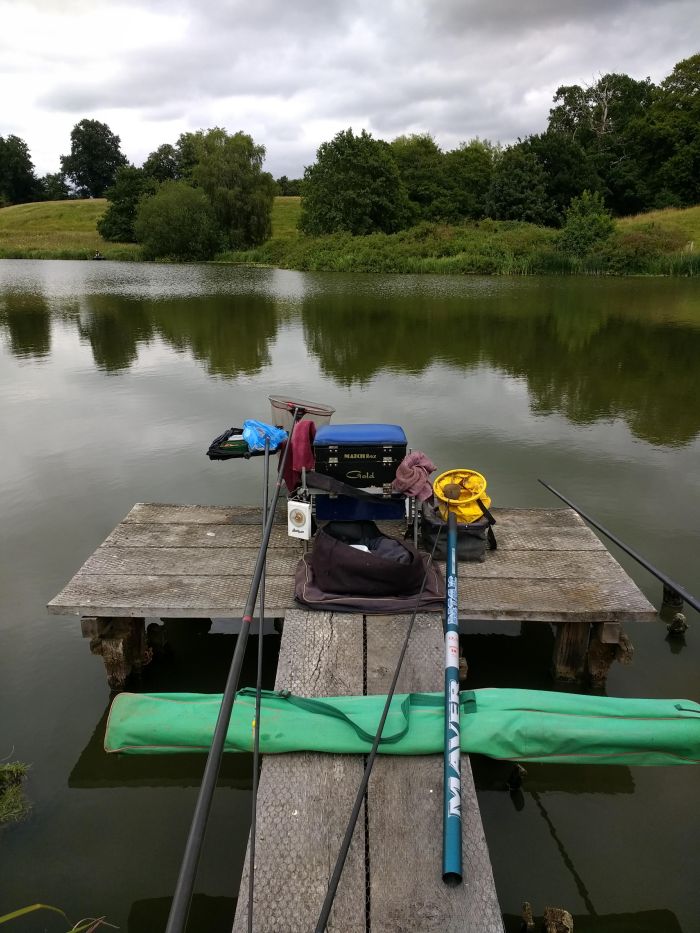 my better half and I go for an early morning walk several times a week and usually stop for a coffee at a tree stump by peg 21. This morning I had noticed several dark shapes , either tench or bream under the surface in pole distance. When plumbing up I had 5 feet at 11.5m and set up with a 0.8g float and 14 hook to 0.16mm Shogun. Single corn followed the three balls of groundbait cupped with 2mm pellets, wheat and 12 grains of corn. Twenty minutes in the float lifted and a strike resulted in a bream of 2-1 coming to the net. Fifteen minutes later a similar bite was met with a far more spirited fish, a tench of 4-14. Another tench of 4-6 followed by a bream of 1-14, 7 rudd, 3 roach and a skimmer gave me a total of 15-13. Glad I went for that walk now!

Friday sees me back at 21 but with no great expectations as the morning walk had not yielded any indications like previously. Same set up and approach but this time a bream of 1-10 first put in then just 4 roach, 3 rudd and 3 skimmers on the corn for a level 3-0.

Sunday sees me back at Bowood but no other anglers- the lake to myself! I decided to bite the bullet and try peg 3 – this has a reed bed directly in front of the platform, 5 minutes of work and I had a channel I could ship out and net fish in.

I reverted back to my peg 1 and 2 rig 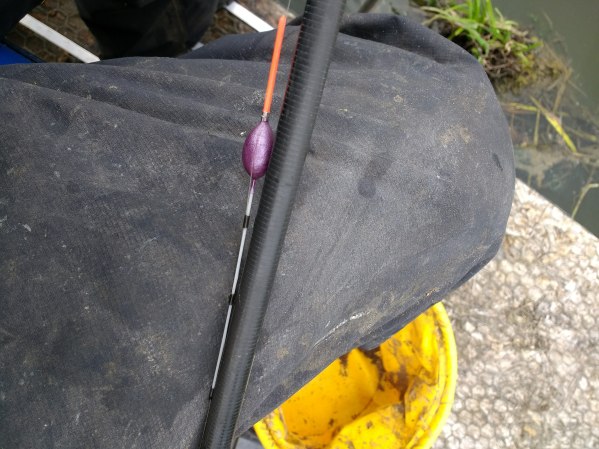 and began with my standard 3 balls cupped in with corn,2mm pellet and wheat, feeding 10 pellets and similar amounts of wheat every other cast. First put in I had a 3oz rudd on single corn, next put in a larger fish pulled the elastic out and I was pleased to put the net under a rudd of 1-1, my PB for Bowood.

The 3.5hour session went well with regular bites despite the attentions of pike that still refused to take a lure! I ended up with 50 rudd (not including the one above), 8 roach and a skimmer plus a bream of 2-9 for 13-4 from a swim nobody fishes because it looks unfishable.

With my next outing on Tuesday I am going to try another peg in the 20s.

One thought on “July Japers (part 1)”