October arrives and the trek to peg 12 at Bowood starts- I tend to stick with the same peg/area as so few people fish in the winter that I feel sticking to one peg gets the fish accustomed to finding food in the area, plus it is deeper than others in the area. Anyway the month started very positively with me having a pike of 5-6 on a sardine before I had even finished putting the pole up. I have found that the size of bait is more important at Bowood than the type, a bait too big or too small will often be ignored for some reason so now I head to the nearest Tesco and buy up their stock of sardines- usually about 12-14 fish at a cost of about £2.60, far cheaper than the packaged “pike” baits- and then freeze them in pairs for later use.

I was unable to visit Bowood for the rest of the week and on Sunday I returned to Port Talbot Docks with Darren for an open. We were due to meet at the cafe at 8am for an 8:30 draw but suspicions grew and then realisation dawned – we were sitting in the wrong cafe! A quick check and move we finally got to the correct cafe, paid our money and had a bite to eat. I drew one of the Golden Pegs – peg 11, on the boards and set my stall out like our previous visit with 8m margin pole to hand and a feeder set up. The big difference was that I had mixed up 5kg of groundbait the day before. I began with 10 balls laced with corn and dead red maggot on the pole line and was into small roach immediately. My set up of 14g float and red hydro may seem extreme but it works fine and 165 roach, 1 perch of a pound and a two pound bream later I was happy with the set up. I did try the feeder (for too long) and only had 6 fish on it. I also lost a large pike that had the red hydro right out for several minutes before it’s teeth finally cut the line! At the weigh in  I had 16-8 which was okay for the first match attempt there, Darren had drawn 14 and had 16-12. The strangest part of the day was the shift in water level- first rising by about 6 inches then dropping at least 3 feet, if you look at the photo below, the water at the start would have been well up my leg! 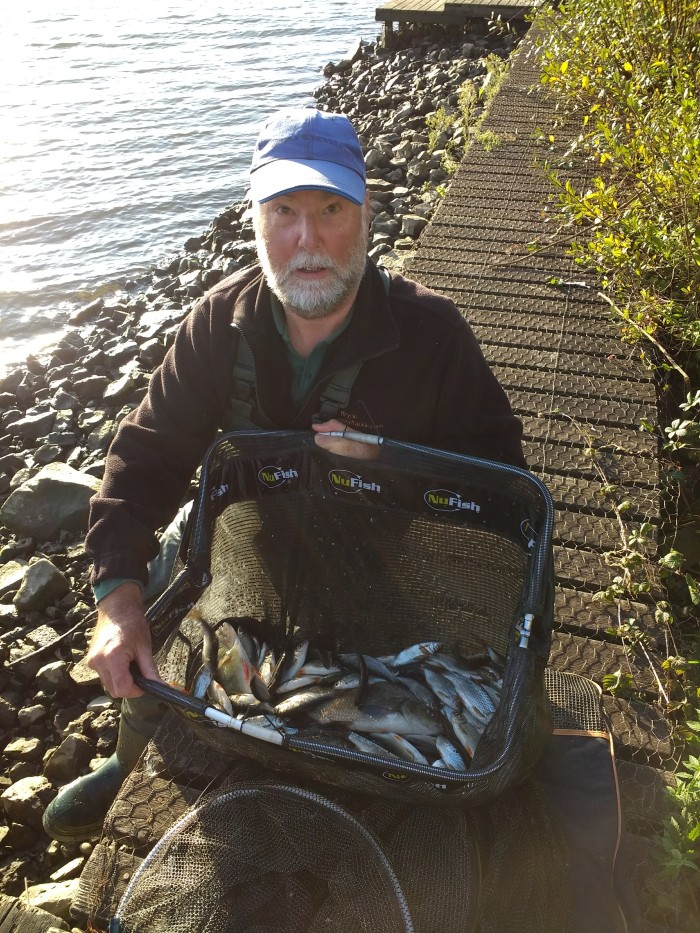 Darren has since talked me into fishing the six match Winter Series at the Docks!

Back to Bowood, peg 123 (of course), wind and rain, good looking colour made me hopeful of the bream showing up but 31 roach and 19 rudd later I packed up before the latest set of rain clouds hit (just managed to get back to the car in time!). No pike interest but was not expecting much with the colour and strong tow on the water.

Couple of days later I returned for a short session (9-30 to 12) and again nice colour but the tow had eased but there was a lot of loose weed in the water following the heavy rain, which made it awkward with the pike rod as it was constantly picking up floating clumps. I nevertheless had a solitary run from a pike of 8-12, 13 roach and 24 rudd on double maggot.

Another couple of days of rain sees the water like chocolate and more rain making things unpleasant but started with a roach and two small skimmers in first 5 minutes, then nothing for an hour and a half, so I decided to pack up, just managed to pack the pole up and I get a run resulting in a pike of 12-0 – I then packed up and went home! 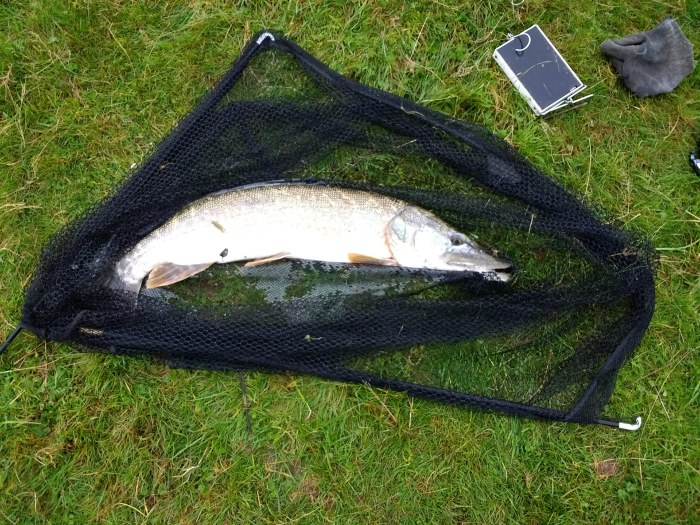 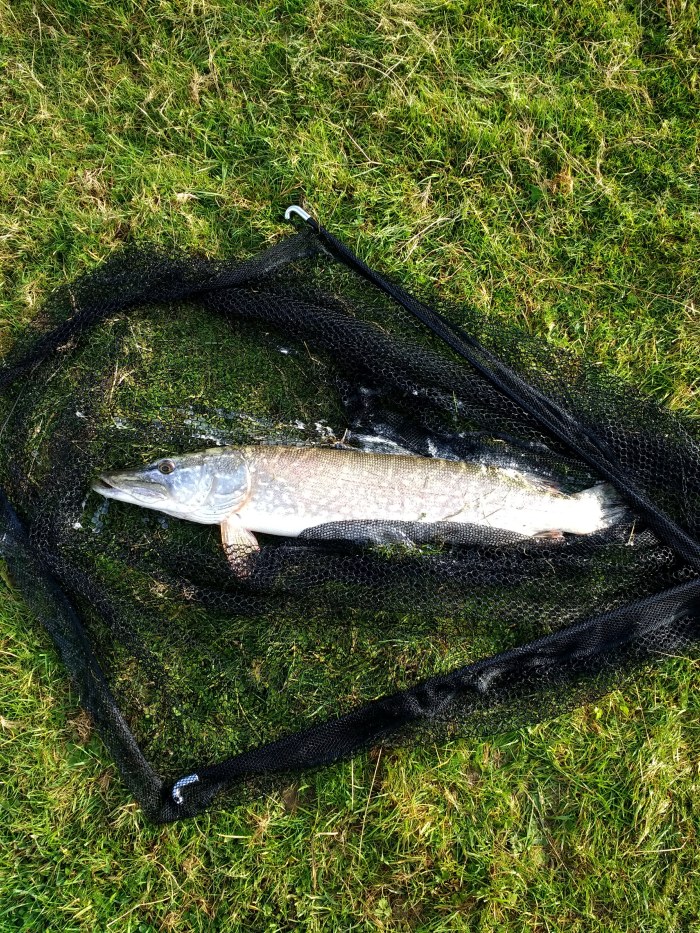 Two days later, Sunday, I was back and once again like all the other sessions had the lake to myself! Fishing 10-1 this time, it was busy with a pike of 8-12, a missed run plus two other pike attacks as I retrieved the sardine, 29 roach and 3 rudd, including one of 14oz.

Interestingly I could not get the pike to take the bait when I deliberately tried sink and draw or “spinning” with the sardine!

Monday was cold so on Tuesday I broke out the winter gear for my visit to peg 12 and yes it was warm and sunny and it felt as if I was melting! 46 roach and 4 rudd kept me happy,no pike but two of the roach were 1-3 and 0-13 which was a bonus in the sunlight!

I had a couple of days away from Bowood to get myself sorted for another open at the Docks- our last opportunity before the winter league series started due to other commitments. The hour and a quarter drive passed quickly and arriving at the correct cafe this time we found we were far too early. Eventually we were allowed in  and once again I drew a Golden peg, this time peg 19, not really a peg with any form as such. This time I had mixed up a concoction made from the Caperlan range of groundbaits, with vanilla biscuit and Riviere the main bulk. I had also decided to set up a  5.4 Chinese whip- this is not 5.4m it is more like 4.75m, coupled with a 1.5g Paster float with olivette and three droppers. I set up the 8m margin kit along with the feeder but I wanted to see how the whip would work. It was a bit shallower than I expected but was still 10-11 feet where I would be fishing. At the whistle 10 balls laced with corn, wheat and dead reds went in at 8m while I decided to feed more sparingly than previous and put a small ball in every 3 put ins. I had a break of an hour where I tried the 8m line (11 fish, 2 perch 2 small skimmers and 7 roach) and the feeder (nothing). I had been hoping for some bream but it was not to be on those lines.

The whip worked well and I ended up with a total of 222(including the 11) and had at least 40 each hour I fished it. I had some distractions- a 4.5lb pike that succumbed to the whip but didn’t count!, a 2lb bream plus a further 2lb bream lost on the way to the net. My weight of 19-2 was good enough for 4th on the day, beaten by a bream weight of 19-4 (ouch!) from form peg 20, and two weights of 36lb and 29lb off the boards. Darren fished the full 6 hours on feeder just to see and crashed out with 9lb as the skimmers were not really feeding with a lot of cold flood water entering the dock and unusually calm conditions- at least it was dry! We had lots to think about on the way home which took a lot longer than it had in the morning! Now I think I have a plan for the series, but it is going to be hard with twenty taking part, you score your position, ie 1st gets one point, 2nd two,etc but can drop your worst two results. I will be happy to finish in the top half but that is going to be tough!

Last fling at Bowood this month sees 12 a bit clearer but with a tinge in the water so 10m was still my line of attack. I was about to cup out my groundbait when I had a run that resulted in a jack of 4-12. Eventually got the pole started and ended up with 21 roach and 2 rudd but only after I scaled down after half a dozen as the going was slow. This is normal for Bowood- you can fish heavy up until this time and then with no warning you need to scale down from 0.16mm to 0.10mm in order to get bites. Retrieving the sardine I had a pike snatch at it and take it, I resisted the urge to strike and waited for it to settle and move off, a firm strike was met with solid resistance and then nothing, the head of the sardine came back like you see on cartoons when a shark has bitten through a fish! An hour later, just before going I had another run which resulted in a pike of 9-8. A nice ending to the month (although I suspect I may be able to grab a couple of hours at Halloween!).