If Hong Kong had the potential for death by a thousand umbrellas, Zhongshan had a plague of bikes! There were hire bikes everywhere, plus electric scooters, scooters and motorbikes not to forget the cars! Our hotel was a 10-15 minute walk away from Gareth’s apartment block and entailed us crossing two major road junctions, fortunately there were lights to help us, unfortunately the red light to stop cars also meant that cars turning right could ignore the red light! Added to this electric bikes and scooters did not obey any traffic signs or rules and often weaved in and out crossing intersections diagonally, plus they could ride on the pavement ! A strategy was needed in crossing a road and Gareth’s advise was act and walk confidently! I took it one step further and stared directly at any approaching vehicle to let them know I was aware of them and they had better stop! It worked in 99% of cases with only a top of the range Mercedes driver deciding he could ignore me!

Gareth uses a Chinese form of Uber – DD. Uber tried to get a foothold but gave up as DD undercut them or offered free rides! Taxi fares are very cheap – a 15 minute trip on our first fishing expedition in a premier vehicle(you get free bottles of water) cost 60p. So to the fishing… 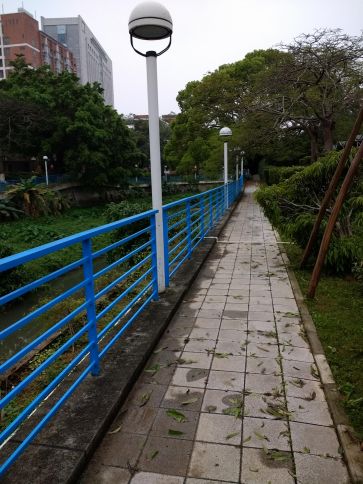 The taxi ride had taken us to a small stream behind a college car park. Accessing to the right of the security cabin  at the bridge we went down a short flight of steps to the “promenade”. The top picture is looking back at where we came in by the bridge with the water only 2 foot deep, the shoal of tilapia and group of carp scattered on our arrival- it was very noticeable how wary the fish were.The middle picture gives you some idea of the width, plus how high we were off the water, the final picture is looking into the distance – the white block you can just make out is a tree with the bottom two foot painted white, this was our spot, under the tree.

I had planned to video the session but could not get it to record (only realising afterwards that this model would not allow you to record while plugged into a power pack, unlike my usual camera!). There was a nice colour to the water and a shoal of tilapia were in attendance when we arrived with carp up to 4lb but mainly around the 2lb mark going back and forth along the far back vegetation. We were about 10 feet off the water and tackle consisted of telescopic rods with a paternoster to a 14 hook and worm as bait. Third cast I had a little rattle and waited only to be told by Gareth that that was it! There were plenty of fish in front of us but it was very slow in terms of bites. I decided to change to a waggler and Gareth advised fishing very shallow- 6inches. So waggler set up, worm on a 14, first 6 casts, 6 bites all missed! I then decided to just put a piece of worm on about an inch in length, result – a tilapia, my first fish in China.

I let Gareth act as my ghillie and unhook the fish as it is a bit like a perch with spines and sharp edges around the gills but more of them and a lot more muscular. Holding even a small tilapia was difficult as they seemed to have an ability to squirm out of any hold you had on them, leaving you with lacerations! We only had a shortish session of a couple of hours as we were due to go out, but I did manage 4 in that time with Gareth chipping in with a couple also but he had spent most of the time trying to catch a carp off the far bank on paste.

We returned the following day to find the water clearer than previously so after a couple of trots with no interest I changed the depth to about 18inches. Fishing worm pieces I had about 20 tilapia of different sizes but also lost a fish when trying to get it up off the water that looked as if it may have been a bleak variant that Gareth has had before.

You can see in the video how we are off the path and fishing between the branches!

It was frustrating that the carp would not look at any thing despite rooting around for pellets that Gareth had thrown in.

Next installment we visit the paste meister of Zhongshan.