Skip to content
HomeMisery and Ecstacy – a typical November

November begins with a trip to Radcot for the penultimate North Wessex Winter League – not my favorite venue due to the potential long walks and it’s peggy nature. The first bit of good news I had was that I had drawn the upstream A section which was the shortest walk but had the board. On arriving at my peg which was high off the water and sloped down into 10 feet of water just as the river came round a steep bend, I was told the match the previous week had caught 1-9 off the peg! I knew I was in for a hard match as there were chub pegs a plenty down the other end of the section and peg 1 was a noted chub peg. First hour on pole after cupping in 5 balls of hardish groundbait laced with a sprinkling of casters produced 3 roach, a perch and a chublet, despite trying worm, feeder, waggler and various combinations of bait I had just 2 more roach in the last 4 hours for a 1-7 total, which I suppose was par for the peg, and 2 points.

Fed up next day I went to Bowood to find peg 12 taken so slotted into 11 (which is a decent distance apart-20+m). Starting off I put the pike rod out with a sardine on a single hook trace and proceeded to set the pole up at  10m, cupping in 2 balls of groundbait laced with a few casters from the previous day. After an hour an no response from anything I cast the pike rod towards the middle rather than by the pole line. This worked with a run that produced a 6lber, it then went dead. The guy on 12, also biteless packed in at about 12 and went home.

I waited until he was in the next field then cast my sardine into peg 12 from 11 to roughly where I was expecting the pike to lie – this worked with two fish of 5-12 and 11-8, giving me a 23-4 total made up entirely of pike. 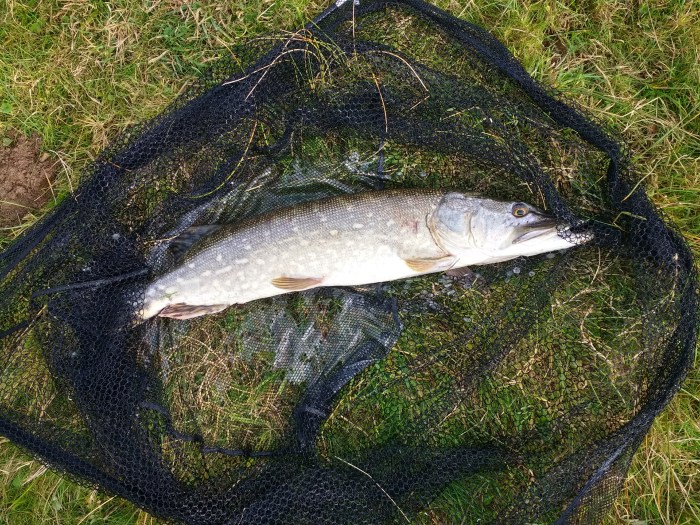 It was Friday before I returned this time to find Bowood in a very windy state but peg 12 free. Starting in my usual manner, after an hour I had my first bite and proceeded to hook my first 3 fish, all roach, and lose all of them on the way in for no apparent reason. Fishing at 11.5m was proving difficult to present the bait properly and a particularly strong gust saw the pole being dragged to my right by the wind and me finding an 8oz roach hooked on the end! Nothing else happened until mid day when …

My previous best (landed and weighed) pike was 14-12 from the canal, so to have finally broken the 20lb barrier was something that put a smile on my face for a few days! The only downside was the pike I had lost a couple of years ago dwarfed the 20lber! 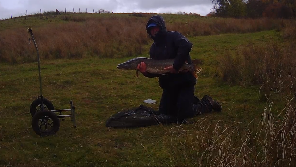 The following Monday back to peg 12 and – a blank! Not a sight of a fish moving and even the grebes were conspicuous by their absence!

Friday arrived and I was back at Bowood again beaten to peg 12 so dropped into peg 11. The good news was that the guy on 12 had caught a bream of about 3lb, so perhaps they were beginning to move back in to the area.Setting up the pike rod with a sardine , I put it out to about 15m and began to set up the pole. I got as far as plumbing up and began to mix some groundbait when I had a run. A quick strike and a fiesty 10-6 pike came to the net. The pike had a very long gash down one side as if it had been raked by a sharp bill.

So on to Sunday and the final round of the Winter League on the canal at Pewsey. I drew F3 which placed me at Bowden’s Bridge. Starting on the bread I had 9 roach before a couple of canoeists went through and killed it. I then moved on to the groundbait and squat just up the far slope (I had 5inches of water right across!) and began to string some fish together but each time they were coming on strong a boat or canoe went through and I had to start again. With about an hour and a half to go I had 46 fish in the net but then a very wide and deep barge went through over the top of where I had been catching, leaving plumes of muddy water in it’s wake – I had 1 small fish off the punch line for the rest of the match, I tried everything but could not buy a bite, ending on a level 2lb and last in section, next weight was 2-3, the 2-14-8, 2-15, 3-8, 3-8, and 4-1 off the end peg. Felt really gutted and even more so when I got back and found the rest of the team had 1,2,or 3 in section. We ended the league in 4th place 3 points off second.

Back to Bowood for some “therapy”, peg 12, cold easterly wind, clear water – yes you guessed it a blank! Returned on the Friday for a dark, blustery day that saw another blank but the highlight was meeting a young stag with a full set of antlers on the track down and getting to within 6 feet of him before he jumped the fence and ran across the field. Not a fish but a nice compensation for another blank – that is why it is called fishing not catching!

One thought on “Misery and Ecstacy – a typical November”