I managed to get out to Patneys one more time before April arrived and decided to have some practice on the bomb with the Viaduct Fishomania coming up. So bomb rods only (to prevent any change of heart!) I settled down on the right hand side two pegs past the island and for once set up a brolly as the forecast was dire with wind and rain and for once they were right! I began by pinging out 3-4 8mm pellets every 3-4 minutes and experimented with a new type of free running connector for the bomb that I had got from China. After the first cup of coffee to warm me up, I began to get some indications, with little nudges and the odd liner, before finally after an hour I hooked into a small carp of about a pound on a 8mm drilled pellet (spicy sausage flavour), a further half hour passed before a fish of about 2lb took a wafter. I had another of around 3 pound before I decided I had had enough of the wind and rain that was getting worse plus my coffee was finished, so I went home happy with the new connector.

Viaduct arrived and after a dry spell we had heavy overnight rain that was to put a dampener on proceedings as it turned out. I drew peg 60 which is on the right hand side of Lodge lake, right by the turning for match lake. This was the peg I had drawn in my first Fisho match many moons ago, so I knew it held plenty of skimmers and the odd carp, I set myself a target of 50lb as the peg would not frame in the main match. I had illustrious company either side with Dave Swan on 59 and Tony Curd on 61, so at least I would be able to pick up some pointers for the future from the way they broached it. I am realistic in knowing that I stand little if any chance of winning the match and qualifying for the final and treat the day as a “cheap” form of coaching, by picking up on what the others are doing. Having said that, I only apply for the venues where I feel that if I draw the right peg and fish to my ability I will have a “chance”, albeit a small one!

The three of us primed a pole swim, mine at 11m, Tony at 16m, Dave at 6m at the edge of the overhanging willow. My practice was not needed as apart from a couple of nudges no bites were forthcoming on the lead so after an hour I switched to the pole, no indications then a bite! A skimmer of about 12oz, basically after 3 hours I had had 3 bites from three skimmers, Dave had hooked three carp and lost all three in the snags under the tree and had decided to pack up and go  after 2 and a half hours, I made a decision then which was most unlike me to pack up, the pegs opposite were catching carp and there was no way I could do anything in the section, as I began to pack up so did Tony! He had fared slightly better with one carp and a few more skimmers. A disappointing day in all regards, especially as the news had filtered through that after 3 hours someone on Campbell already had 24 carp!

So next time I could get out was the following weekend with a Match fishing scene match at Boddington. This was a silvers only match and was one that everyone looked forward to as the match last year was won with 40lb of roach. I had taken over the running of the match as the original organiser had a family issue and couldn’t make it. I drew peg 52 which was towards the end of the length and I had Gooner and Toplights for company. The match did not go as expected with only 12lb needed to win it, top two weights from both end pegs. I ended up with 22 roach, 11 on the pole at 9m and 11 on the waggler at 20m, for 4-8, that put me 4th in section, Gooner tipped back and Toplights had 2-15. Another disappointing day.

I then had to travel north to take the mother in law on holiday to Bridlington.  For various reasons I only had chance of three short sessions. The first was after my original venue turned out to have stopped day-tickets and a visit to the south end found a sign for a fishery. Driving down and over three fields I finally came upon the water, gin clear, weedy but about 7 foot deep. 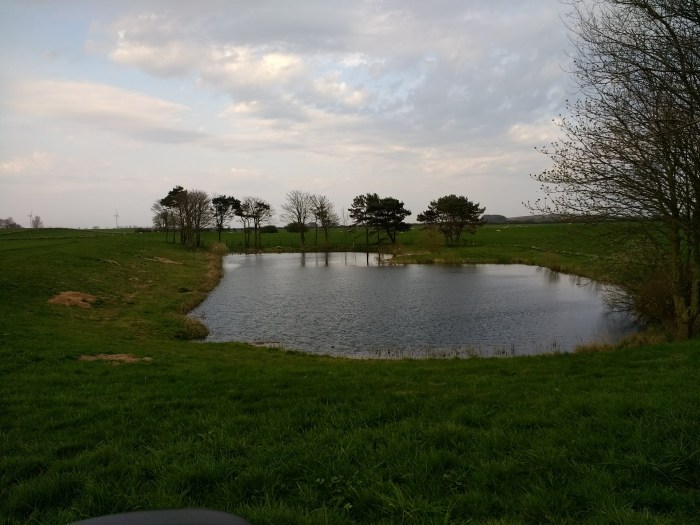 After giving it a couple of hours with a freezing wind in my face and no bites or signs of life I packed up.

I decided to return to Rosedale at Humanby, as I knew that at least there was the chance of a few bites. So next afternoon I plonked myself down on peg 38 and fishing the float had 11 skimmers, 11 roach, all on corn plus lost a carp for about 7.5lb.

Two days later I was back and this time fished Peg 4 but decided to have an hour on the method before fishing the margins with beefed up float tackle ie 0.18mm hooklength! A carp of 5lb and a skimmer of about a pound obliged on the method before the switch to the margins where I had a string of bites on corn, but as always at Rosedale they were very difficult to hit on the waggler, but I landed several reasonable roach but no sign of carp. It was interesting that on my two visits it rained- quite heavily, and I remarked to the bailiff that I had now fished Rosedale 8 times and it had rained for 7 of them!

Events meant that the fishing was curtailed and it was not until returning home that I could get out again-more than a week later. I headed to Patneys and for once the weather behaved and I could fish in a tee-shirt! I was planning on going down on my favorite peg but as I got to the lake the bearing on my barrow wheel popped out! I decided to stay at the top end of the lake and fish the first peg. I had decided to try a slightly different approach today and on plumbing up decided on 2 lines at 13m, about 2m apart. The left hand one was kick started with a ball of groundbait, a handful of micros, and about 20 4mm cubes of meat. The other was given a pot of micros with a similar number of pieces of meat. I then loose fed maggot over the top of the groundbait line and micros over the other with the odd couple of cubes of meat.

I had about 5 feet of water and starting on double maggot had 3 skimmers and 3 roach and a rudd before I hooked a small carp of about 10-12 oz. I found that I could not get a bite over the right hand line until I introduced groundbait. I had a pleasant session with 16 carp, albeit small, biggest 2lb, 6 skimmers (averaging 10-12oz), three roach and 3 rudd, losing 6 carp in total, including one better specimen. All the carp after the first came to a single 4mm piece of meat, as did the skimmers. I ended the day just about 20lb in total.

Next up Fisho at Larford and a three day MFS festival at Woodland View.