A strange title you may well think but everything will become clear by the end!The month starts in a quiet way with a visit from China of my youngest, Gareth and his wife Wendy. First visit was for the three of us to go for a short session at Patneys (right hand side in the bay area where I had fished with Tom and Simon). Wendy was set up with a whip (Chinese of course with Chinese float), Gareth set up a pole to fish at about 7-8m and I fished long at 13m. First fish for me was a carp about 4lb and a trio of 2lbs plus rudd and skimmers followed to a variety of baits. Gareth hammered out the rudd and perch together with several 3lb carp and Wendy caught perch and rudd steadily before we departed.

Next outing was just the two of us and we visited the local River Marden at Hazleland to fish the weir. Now it has been over 10 years since I last fished the Marden although it is the closest water to me, I can’t figure out why it was so long between visits. Anyway we set up light with a bag of tackle (bag/seat) and an unhooking mat to sit on a pint of maggots, some worms and cheese. A simple running lead with a 3/8oz bomb to a 4lb hook length and 16 hook completed the set up. A short flick into the edge of the flow soon saw Gareth in action with a couple of trout (most unexpected), 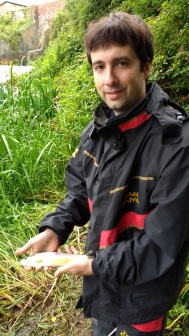 This was followed up by a bream and an eel, while I contributed a couple of small chub. Plenty of bites on worm, maggot attracted too many minnows!

One further visit before he went back was again to the Marden, but downstream at Stanley.We were both shocked to see how overgrown it had become with some of the prime chub and barbel swims no longer accessible. We managed a few small chub by moving around but we both left feeling a sense of regret at the state of the stretch.

Gareth sent me these pictures a couple of days after their return to China, caught in the swim where he had the monster catfish, he had 4 on paste. Not sure what the fish are, my first glance said roach/ide but the mouth is more carp like- answers on a postcard please if you know what they are.

Back to the UK my first outing was to the Glebe for the Angling Trust Masters, a team of 6 event where I was lucky enough to be representing MatchFishing-Scene. The event was down on numbers this year due to a clash with the Division 1 National and other events, but even so the calibre of angler was high and my target was to not come last! Pools paid and team draw made, I found I had been drawn on Uglies, peg 44 by all accounts a potential good peg with big carp on offer. Setting up I could only see two other anglers on the far side – the maestro Andy Kinder (if you ever get a chance for a coaching session with Andy, take it- he is a fantastic coach) and Nick Merry.

My peg had a large willow on my left that I could get under and fish against the boards, I also had a shrub on my right margin, both of which were fed, a 6m line at the edge of the willow and one at 11m directly in front, plus another short line in front. A feeder was also set up with the minimum hook length allowed of 20inches. I set up a rig for each of my lines to a 0.20 with hooks varying form 16 to 12 (my paste rig). The all-in sounded and I fed my 11m line with 3 balls of groundbait and half a pot of micos plus some 4mm and corn, the short lines were fed differently with the willow line seeing a pot of 4mm and corn while the line in front had micros (this was going to be my paste line).

To cut a long story short my first fish came after 10mins – a roach on the 11m line. The next 2 hours saw no action from carp on any line plus nothing on feeder, desperate, I put a bunch of maggots on and immediately began to catch small perch on the 6m willow line. With an hour and a bit to go I had 5-7 in my silvers net and no carp, Andy and Nick had both been catching on the bomb out towards the central island that runs down Uglies and Andy was now catching short in the margins. The heavens then began to open and I finally hooked something in my right hand margin (I had been cupping in big pots of groundbait every 20 minutes or so for the previous hour)

This one went about 11lb I had another of about 8lb and pulled out of a foul hooked one  to end up with 19lb of carp and a total of 24-7 and last in section. At the weigh-in Andy said it was a feast or famine peg – if the carp turned up it would have been solid but if they weren’t there it could be a real struggle- as I found out! Team wise we came last but one!.

A short session on Peg 139 at Benger on the weir saw me go light with the same kit as on the Marden and a couple of hours later saw me finish of with some roach, dace, perch and one bleak all taken on the lead. Nothing spectacular but a pleasant session.

Bank Holiday week-end arrives and the final match of the Wessex Summer League at Clanfield. We were heading the league but our closest challenge was going to come from Bankers who had pulled in a couple of “ringers” including Richard Chave of Colmic! Drawing last as League leaders we had peg 2, the boards, and I was on C section. Clanfield is a pleasant way to end as we can drive along the fields and park next to the peg. On this occasion we had a herd of inquisitive young cows that  made their way along inspecting each car and cleaning the cars with their tongues!

My peg looked fishy with a big willow on my right hanging out 10m into the river, just to the edge of the flow, rushes on the far bank (but no flow), and a steady depth on my preferred line at 10m at the edge of the flow. Five balls of Bait-tech Pro-Natural with a handful of casters and wheat were cupped out at the start and a 2g Paster to 0.12 Shogun and 0.08 hooklength to a 22 completed the set up. The shot was bulked 18 inches above the hook with 2 no 8 droppers. Red maggot on the hook saw a steady stream of bites by sometimes running through with the flow and other times holding back, if bites slowed a change to white or bronze maggot brought a quick response before returning to red again when it slowed. I had intended to create a worm line but on opening the bag found they had mysterious all died overnight and I did not have a single worm. By topping up with a ball of groundbait every so often and loose feeding hemp and wheat with the  occasional caster I ended up with 1 chublet, 92 dace, 9 gudgeon, 3 perch and 15 roach for a total of 4-14 and 3rd in section, beating Mr Chave of Bankers in the process. The team finished 3rd on the day and we won the League!

Now back to the title – 3 hours in and boats have been going past on a regular basis then we get a boat that is constantly revving and spluttering that finally dies at my peg and drifts end on against the willow, they managed to manoeuvre it back to the far bank eventually (30minutes plus!) then hailed a long boat for a tow back up the river- this is what happened…

Hey oh- tomorrow is another day.