I decided to have a break from Bowood and headed off to Blacklands but this time Heron Lake, where Gareth had caught through the ice last month. I rolled up at the same peg and lazily set up one rig to fish the 6 foot or so of water at 9m. Using one of my homemade floats taking 0.4g, coupled with 0.10mm mainline and 0.08mm Shogun hooklength to a 20, I set it up with the bulk about 18 inches above the hook with two no10 droppers spaced out below. I opted to prime two swims about 2m apart, the left hand one was given half a large pot of chopped worm with a few casters and a sprinkling of micros, whilst the right hand one was fed with the same volume of micros and a few casters. Both swims would be fed by catapult every couple of minutes with 5-6 casters.

Bites were not long in coming on the worm line and a run of roach in the 4-6oz bracket were interrupted by a roach over a pound (I had left the scales in the car). Not long later my no 6 elastic was given a stretch by a whopping perch that had me scurrying back to the car for the scales. When the needle settled it showed 3-1, a great start. The day continued and later I had another good roach, but smaller than the first, this was weighed and went exactly 1lb. When I packed up I estimated I had had 30lb made up of 20 roach, 20 skimmers (best 1lb) and 36 perch, including another of 1-4. A solitary carp of 4-8 also featured from the micro line on caster! 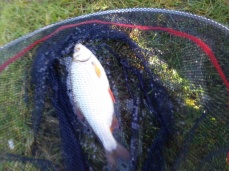 From the sun in the photos the weather turned to rain and it was on the Wednesday I went back to Bowood (peg 12!) hoping the coloured water, sorry chocolate, might prompt some fish to feed although I did not expect any pike. I was right about the pike  and managed to sneak out one small bream of 2-4plus a load of roach and skimmers for a 7-8 total. One unseen lump was also lost as nearing the net, grrrr.

Friday saw me back with the temperature back down to 1C. The chocolate had turned to tap water in just a couple of days and this time the only action were from two jacks of 6-12 and 5-4, not a single bite on the pole!

Sunday came around and off to Pewsey Lake for a club match. Peg 12 saw me down the right end again, but I am going to have to put in some serious time to get to grips with this lake. No carp on the method or waggler- remember last match! I ended up with a clutch of roach for 1-8- just enough action to keep the interest but annoying in that I lost a very good fish towards the end of the match that may well have been a bream.Tactics were similar to previous matches and not much different from the others fishing. Must try harder me thinks!

Tuesday and back to Bowood to find the tap water had become even clearer and worse still someone else was there fishing AND in peg 12!!!! I decided to give the other angler room as although the pegs are well spaced I went on peg 10 which was 40-50 yards distant.T water here is about 18-24 inches shallower but I set up the pole and cupped in three pots of loose groundbait with some casters. No bites an hour later when the pike float bobs and a run develops, pole shipped back quickly I managed to hit and land a pike of 12-04. Nothing else happened for another hour or so when another run on the pike rod was inexplicably missed. That was the end of the action, the guy on 12 had 1 jack plus 3 other runs which didn’t result in secure hook ups.

The final escapade in this session was back to Blacklands and Heron Lake, this time fishing on the Toilet Block bank at the point of the island. I could reach the point of the island with the pole but as I was after the “silvers” I ignored the obvious feature and plumbing up decided on 9m. Tackle was a homemade float with a chianti style body but a hollow tip, taking 0.45g. This was teamed up to 0.12mm Shogun and 0.10mm Shogun hook length. Bulk was set about two foot from hook with one no 9 and one no 10 dropper to a 20. Groundbait is banned so I began like the previous visit with chopped worm and casters a with a sprinkling of micros in front of me and micros and caster to my right. Both lines to be fed with casters but the micro line would also get alternate helpings of micros.

The first difference I found was that there were more roach about than had been the case before when perch were the dominant species. I had two that I weighed  1-4 and 1-2.

To cut a long story short I had the best part of 30lb by the time I was visited by Brian Shutler who had come to recce the venue for a match I had organised in a weeks time. I had also tried cheese as a third line but could not get a bite just over the cheese, but as soon as I had gone over the micro line I had been getting skimmers on cheese. While Brian was there I put some cheese on and had a bream of 3lb plus some skimmers, I also had a perch of about a pound and a quarter on the worm while he was there. In total when I packed up I reckoned I had caught 39lb made up of 40 bream/skimmers, 36 roach and 18 perch. (I tend to keep a mental record of the fish as I go along with the weight being added up in ounces fish by fish)

Hope the match fishes as well as this! I may do a feature on fishing the cheese in the future.