April promised to be a busy month in terms of matches with 7 I was committed to including 2 further Fishomania qualifiers, a Feeder Masters qualifier and 3 MFS matches.

Match 1 was an MFS silvers match at Barston, a venue I always enjoy going to. The early start meant I had to scrape the frost off the windscreen as it was -2 when I set out but ensured I was there in plenty of time for a bite to eat and drink before the draw in the lounge area of the Golf Club. The talk was of needing higher numbers and certainly past the mid 20s – I drew peg16, second peg as the match started at 14, so a short walk but not a promising area. As it was a float only event, I set up a waggler plus 3 pole rigs for my 4 foot swim – a 0.5g wire stemmed BGT2 with strung shot for fishing on the drop with a 20 to a  0.10mm hook-length, a 1g Paster with a bulk about a foot from the hook and one no 8 stotz as a dropper with a 20 to a 0.10mm hook length and a homemade wire stem black bristle taking 0.6g to 0.10mm and an 18.

At the start I cupped in two solid balls and two pots full of loose groundbait with a smattering of dead maggots and casters on the 14.5m line and one ball with casters at 11m. I primed the waggler line with about 30 casters. Things didn’t go to plan and the wicked wind blowing into my face did not help, to cut a long story short it was over an hour and a half before I had a bite and by the end of the match I had managed to get  a few skimmers for a level 6lb. The guy on 14 had 7lb, including a proper bream, the next peg 18 had 7 fish for 19lb mostly caught short at 6-7m!

No time to relax my next match was on the Wednesday at Woodlands View, a Fishomania qualifier. The draw saw me on Back Deans peg 43 and the wind and poor weather had followed me again. To say it was hard was an understatement but I weighed in to see what I had – my 3 carp and silvers went 19lb, the guy on my left had tipped back less than me, the one on my right had 4 carp-30lb!! Was glad to finally get home!

Yet again a couple of days to sort things out then back to Viaduct for yet another Fishomania qualifier.This time the weather was kinder than the previous visit and I drew what I thought was a good peg- 97. The next 5 hours was pure frustration, the carp were showing but not having it. I had one of 4lb on the bomb and pellet and pulled out of another that I thought was foul hooked. A change to the pellet waggler at 30-40m resulted in another 3 carp of 3lb and 2 at 10lb and another 3 lost that may have been foul hooked and another 2 where the hook pulled at the net. All the time I had been priming my 5m line with meat so with an hour to go I went on the pole with a homemade short tipped, long stem float, 0.18mm line straight through to a 16 and a piece of meat ripped off a slice about a 6mm pellet size.  Had 4 bites, hooked 4 big carp, lost all 4 at the net when the hook pulled. Result 27-8 (10 carp lost in total- I was not a happy bunny!)

Next day was more of a fun match at Peatmoor Lagoon, in Swindon, for the annual Peatmoor v Three Counties match, this is very laid back and very sociable but the standard of angling can be good also. I arrived at the car park puzzled why there was no one there apart from Pete the organiser, then I realised that the match was 9am to 2pm not 9am draw! Thankfully I am usually always early so I had arrived at 8:25, peg 20 had been drawn for me so off I trotted! My wand came out of the bag with a small open end feeder attached and 0.8mm hook-length to a 20. The pole was kept to one top given the time constraint with the depth being identical at 10 and 14.5m, the homemade black tipped wire stem used at Barston was pulled into service with the depths being very similar. I was ready as the whistle sounded and cupped 3 balls of groundbait with a few casters on to the 10m line, a single ball with a handful of casters at 14.5m then went on the feeder. Second cast I had a slow pull and a 8oz skimmer was in the net, then…nothing. After an hour I went on to the 10m line and had a couple of half ounce roach then nothing. Back on the feeder, all the time I had been priming the 14.5m line with 10 casters every 5-6 minutes, hoping to catch in the last hour. A few more spaced out  solitary roach on the feeder then it died completely, back on the pole and a few more small roach. Last hour came an I went out on the caster line and had a bite but bumped it, five minutes later same thing happened, so I decided to change my top kit for a soft set no3 guessing that the bream would not show and I needed to catch these roach. Next 40 minutes saw a procession of small roach being fed into the net. When the scales arrived it transpired that it had been grim  and my 2-0 was top weight with four to weigh- I ended up 3rd with a late bream beating me 3 pegs away and Pete on the end peg had found 7 small bream for 10lb

Next up was an MFS silvers match at Boddington. I really enjoy this match because the roach fishing is fantastic. Peg 46 so a longish walk compared to some, I set up a video with the intention of recording part of the match as I had Ian Leach, a Welsh international, next to me but somehow it did not record!. The match started with me cupping in three balls and a pot of loose at 6m and two further balls at 13m, in the time I had done this Ian had deposited 12 babies heads at 13m and caught 2 fish!!!I had set up a waggler, the pole for 13m and a 5m whip with a Chinese float to fish on the drop in the last 3 foot of the 10 foot of water. Apart from a short dalliance with the pole and the waggler I stuck to the whip and managed 18-9 made up of 96 roach. A great days fishing, Ian after a quiet period had changed to fishing shallow and gave a master class of catching the smaller roach ending up with over 30lb. I was third in my section- they pay top two!

The last match was another MFS silvers event, this time at Larford, with a slight twist. In this match any carp caught would count but only for 1lb. I drew peg 22 on the Specimen Burr bank and set up a feeder and two pole rigs. One pole rig was the Paster set up used at Boddington as I had top 4 depth of water at 11m. the other was a homemade float to 0.18mm line and a 16 hook- this was for my short line. The feeder set up was different than normal in that you are allowed fixed feeders at Larford, so I had a clip swivel attached to the end of the line with a 6 inch twizzled section. This would allow me to swap elasticated method feeders or put a normal feeder on and attach a hook length. Whistle sounded and I cupped in 3 balls on the 11m line and a few casters. The short line received a pot of 4mm cubed meat and casters. I had a few casts with the method and a pellet just to see if there was any response but soon changed to a 30g standard feeder with a 0.10mm hook-length to an 18 with double red maggot.

After a few casts I began to get indications and then had 3 skimmers in the 1 and a half bracket before it went quiet. A switch to the pole resulted in a couple more skimmers before that went quiet and so back to the feeder but no response. I then made the mistake of discounting the feeder and concentrated on the 11m line until the last hour, with the odd flurry of skimmers but a poor hour and a half in the middle with only one fish proved costly. Into the last hour and I moved onto the short line that I had been feeding meat on with some micros throughout the match. A couple of skimmers around 2lb came to this and a couple of missed bites when with about 20minutes to go I struck into a bite with a loud crack, the pole now looked like a huge swingtip! I quickly shipped back and got hold of the top kit; the pole had snapped 2inches up the top kit! However, my attention turned to the yards of elastic that were streaming out of the remnants of the top kit, I was still attached to what must be a carp!   Fortunately I was on a puller system so was able to begin to exert some control over the fish by retrieving the elastic and constantly changing the direction of side strain applied. After what seemed an age the fish came into netting range and I managed to net my 1lb carp- all 18-07 of it! 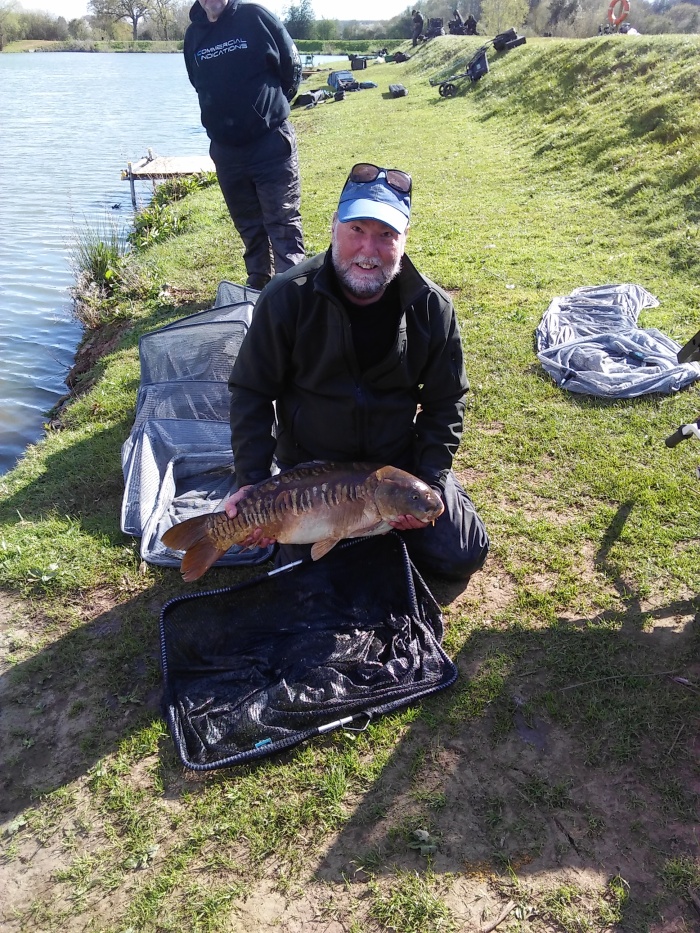 The match finished with me taking another small skimmer off the 11m line and the scales showed 27lb of skimmers plus my 1lb for the carp for a total of 28lb! The width of the carp was surprising- a comment at the weigh in was – “look at its head it’s like a baby’s”.

Next match is at end of April at Larford for the Feeder Masters.