It seems if I touch my kit the heavens open; it is August isn’t it? Had a couple of hours down at Bowood on peg 9 but decided to do things a bit different.

I have been experimenting with Chinese floats and tackle and have just acquired a 5.4m Chinese  whip so decided to give it a go for an hour or so while the pole line settled (experience shows that it is usually 40mins before fish move over the feed at Bowood). Three balls of groundbait and a pot of casters and wheat was put on the 10m pole line while a marble of groundbait and a few casters went on the whip line. The whip was set up similar to the 11m one I wrote about with a dacron type end piece which I tied a knot in and then attached 0.14mm Shogun, loop style, and 0.12mm hooklength to a Sensei F103n 16, the float being the one on the left (the smallest one) which was attached bottom end only using a Chinese float attachment and took 2 x no 8 to lock it in position, 2 x no 1 3 foot from the hook, and 4 further no 8 as droppers.

I was hoping to video the session but as I got to the peg the rain started so I left the camera safely in my pocket!

Bites came rapidly and after 40minutes I had  a few blades in the net with the whip performing admirably but very similar to it’s big brother. 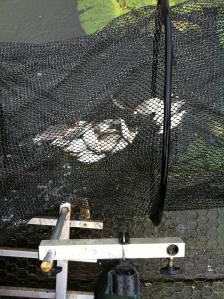 A change to the pole saw a fruitless hour in driving rain before a skimmer of about 8oz  took the corn. One further small skimmer of 3oz followed in the next 30 minutes. I suspected the worst and when a row of bubbles erupted in the swim it confirmed my suspicion of a pike being present. A change to the whip for the next 20 minutes saw a steady run of blades and small rudd grace the net before I packed the whip up in a dry period and gave the pole another 30 minutes. After 30 minutes I thought I would try the wheat (I had caught on the whip with wheat) and second put in saw the float bob before disappearing, a strike met with the solid thud of a fish as it went towards the weed bank but it soon turned and I suspected a bream until it got in close when I saw it was a crucian (one of my targets). Safely netted it weighed 2-12 a personal best!

Buoyed by this success I gave it another twenty minutes and on my last cast put corn on- the float buried and lifting into the fish was met with a solid weight that slowly then much quicker veered off to the right before leaping clear of the water and breaking me – a double figure pike (about14lb). At this point with the weather looking ominous I called it a day.